This circuit is a frequency doubler designed to drive class D push-pull amplifiers on the 630m band.
While class D amplifiers are very efficient and produce high output powers,  push pull designs frequently require a signal at twice the required frequency in order to accurately generate 2 square waves that are 180 degrees out of phase.  The input range of this doubler is 472kHz to 479kHz at a level from +6 to +13dBm.
The output is a sinewave at the 2 x the input frequency.   Fundamental feedthrough from the 475kHz drive is better than 60dB below the wanted 2nd harmonic. 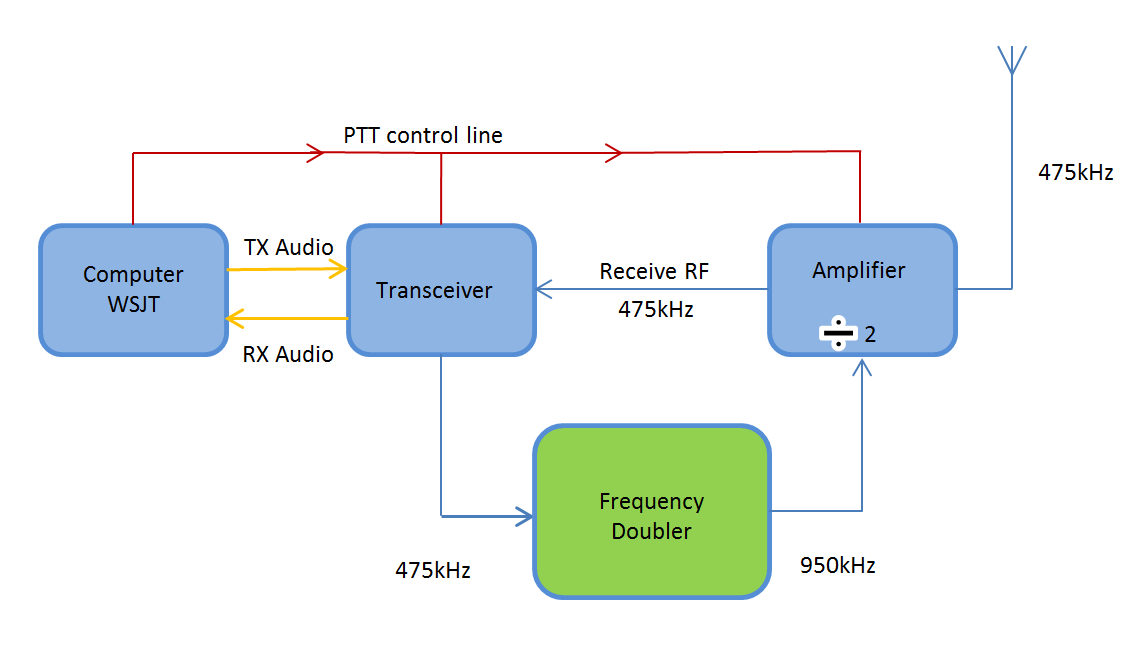 The circuit has 2 parts:
1) A trifilar wound transformer which provides balanced drive to two 1N1418 silicon diodes. The drive waveform to D1 is in phase with the input, while the signal at D2 is 180 degrees out of phase. The diodes act as a full wave rectifier which has an output frequency that is double that of the input. This technique works from mains at 50/60Hz up through the microwave spectrum.
2) A buffer amplifier with a tuned circuit in the collector  resonates at the second harmonic at 950kHz, this converts the rectified waveform back to a sinewave. 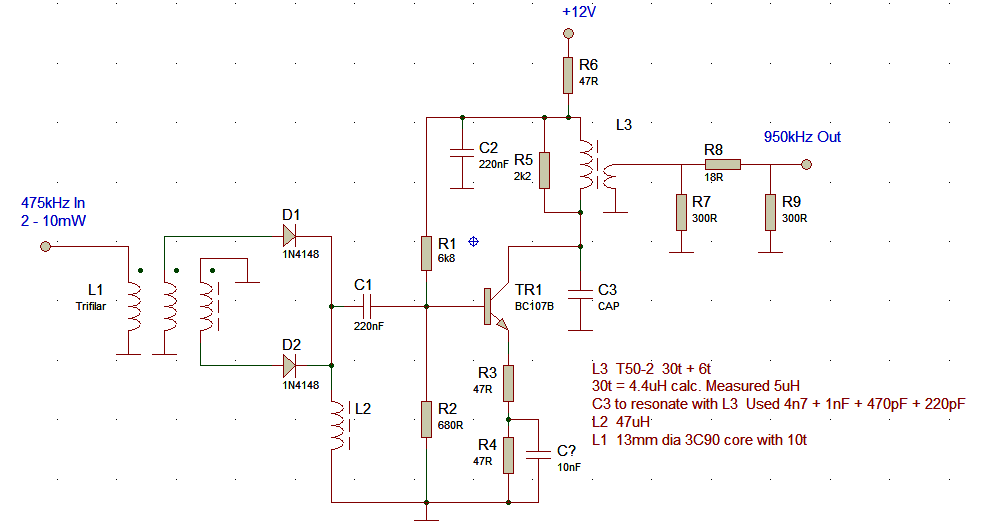 Construction and testing.
The circuit was constructed on a sheet of copper clad PCB material.  3dB resistive attenuators were added to the input and output to help ensure the accuracy of measurements.
The circuit was built and a signal swept between 300kHz to 2500kHz applied to the base of TR1.
The output was examined on a spectrum analyser and the value of C3 adjusted until the peak in response was close to 950kHz.  – With 30 turns on the primary of L3 the inductance was calculated as 4.4uH but measured as 5uH.  A little calculating and a lot of trial and error produced a value of C3 comprising of 4700pF + 1nF + 470pF + 220pF in parallel.  The resonant frequency was measured as 955.8kHz. With R5 to damp the Q, the -3dB bandwidth was 46.7kHz

To measure the input and output levels, a sinewave at 475kHz was applied via a 3dB attenuator to the input winding of L1. This 50 Ohm attenuator ensures a reasonable match between the signal generator and the trifilar transformer. In the table below the signal generator output level is given, but it should be remembered that the input to the doubler circuit is 3dB below that level.  The Output level shown in the table was the level of second harmonic measured  across R9, i.e. after another -3dB pad. 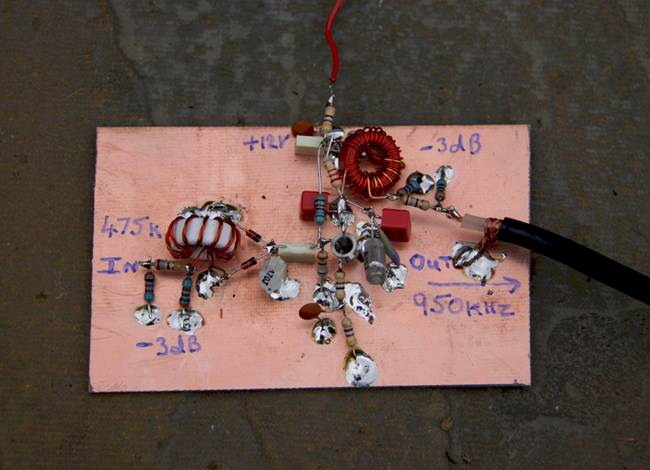 Spectral Response.
The 2 spectrum analyser images below show a wideband spectrum from 300kHz to 5MHz and a narrower view from 300kHz to 2500kHz.   Note the very low level of feed through from the 475kHz source which is better than 60dB below the wanted frequency of 950kHz. The signal generator was set to +10dBm for this test. (So +7dBm at the input to L1) The 1N4148 diodes used were not matched, but were taken from the same production batch. 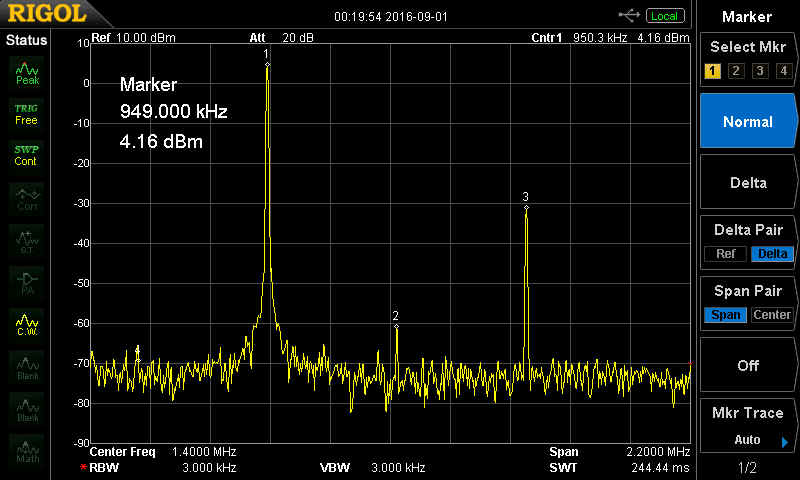 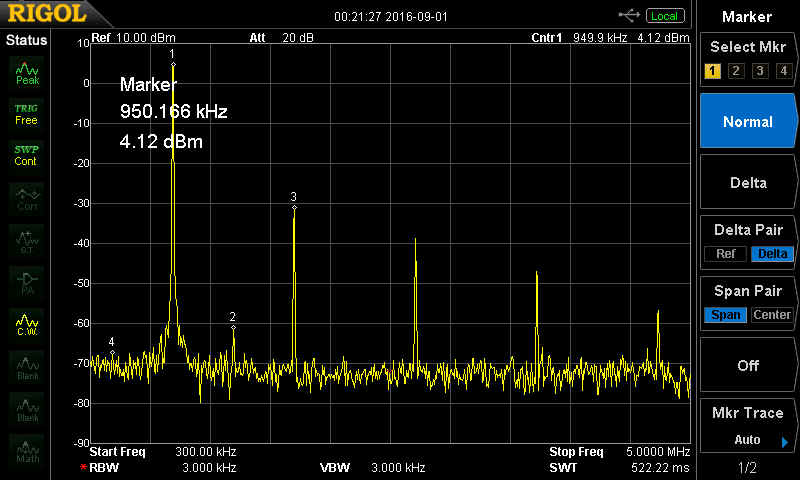 Figure 4     This image shows how the circuit produces even harmonics.

This last spectrum analyser image shows the even harmonics up to the 10th at 4.75MHz.
At the far left,  marker 4 has been placed on the 475kHz feedthrough, this is at around 65-70dB below the wanted signal.

Conclusion.
From the results, it can be seen that when the losses of the two 3dB attenuators are omitted, the doubler can produce +7dBm output for an input signal of +7dBm.
It can also be seen from the table that input levels below +3dBm do not fully drive the circuit. For optimum results, input levels between +6dB and +13dBm at the input transformer should be used.
The supply requirements are very modest, with no signal the current into the amplifier is 5mA.
A tuned amplifier was designed as the adjustments necessary for different power levels are minimal and my particular Class D amplifier uses a HEF4013 D-Type which has a Schmitt trigger on the clock input.  To quote from the NXP datasheet

It may also be possible to replace the tuned circuit with an RF choke and use TR1 as a squaring circuit. That would be easier to build and align, but may be more sensitive to differing levels of drive power. A squarer circuit running from 12V could be DC coupled to the input of the 4013 and DC bias resistor R1 removed.