Oscar 40 was an amateur radio satellite that could provide worldwide communication, but unfortunately the satellite ceased working late in 2003.  AO-40 is a 'phase 3' satellite with a highly eliptical orbit. The following notes were written for AO-40, but the principles apply to satellites in a similar orbit. - e.g. the forthcoming P3E being constructed in Germany.

The AO-40 satellite was launched into an elliptical orbit by an Ariane 5 launcher in November 2000. The orbit comes  within 800km at its closest and over 60,000km when at its furthest from the Earth.

Who can you work?

The following image is from the tracking program Nova for Windows.  The shaded area shows the 'footprint' of  AO-40. Any station within that area can work any other station that is also within the area.
The Sun is also shown on the map. You can also see 'The grey line' - Australia and the USA are in daylight while it's late at night in Europe. 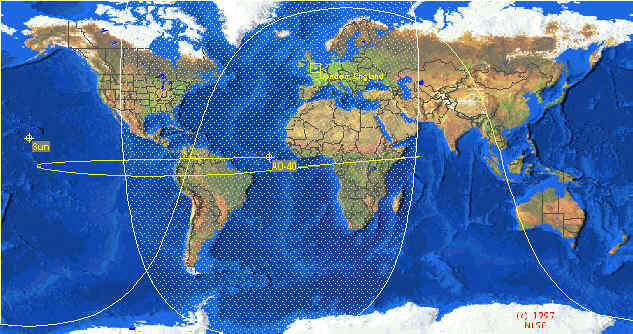 So, what's needed ?
As there are many possible combinations of transmitter / receiver / antennas, I'll give some details of what's in use at G0MRF as a guide.

Antennas and RX converter at G0MRF 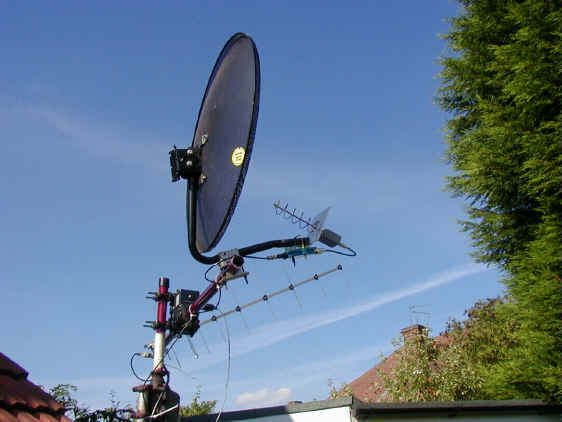 In the photo above, both antennas are quite small. This pleases my neighbours, but it does mean that I need to run more than the average 25W on 70cm to access the satellite when it's range is 50,000km+
Another 'benefit' of AO-40's orbit is that from my location in England the satellite always passes to the south of my QTH. This means that my antennas can be mounted on one side of the house as they never need to point North. In this installation the antennas are just 2m above ground. The photo shows the DEM pre-amp with the Drake converter clamped to the feed support arm.

The size of the 2.4 GHz antenna  will depend on the performance of the receive converter. If the converter has a low noise figure, then a helix is fine. - Providing it's a helix that actually works! The recent converters from DB6NT  G3WDG DownEast Microwave and the new Gemini 2.4G to 28MHz unit all have noise figures of about 0.7dB. These are fine for small antennas.
However if you want the ultimate performance, or maybe you have a converter with a 3-4dB noise figure, then a dish is a better choice than a helix or crossed Yagis.

Having been inspired by Howard, G6LVB, I built the antenna below. The dish was originally used for SKY TV reception on 11GHz but these can be easily converted for use on S-Band. This particular dish is offset fed and is 80cm high.
The dish feed is built on an aluminium plate 3mm thick and 125mm square. The dish is quite shallow and the helix needs 5 turns to efficiently illuminate the dish. A short length of threaded brass rod is bolted in the center of the aluminium, this supports the end of the helix using a piece of fibreglass PCB material.  Note that a helix used as dish feed is wound for LHCP
Recently measured on the Amsat-UK test range, the gain was 21dBic 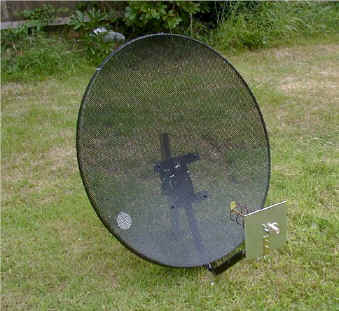 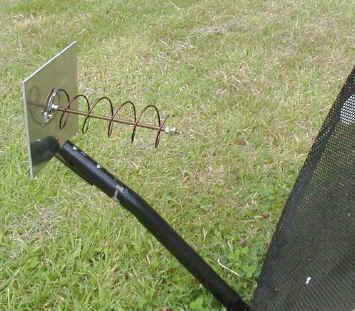 How strong are the signals after traveling 50,000km ?

Here are two pictures from my IC756. The first, on the left is from 7/Aug/2001. The antenna in use was a 28t helix with the Drake converter. The reason the RX is tuned to 48MHz is because  I mixed the 2m output of the Drake converter with a 96MHz crystal and 2400 appears on 48.000.  So in this shot the receiver is tuned to 2400.386.81MHz. On the left image you can see 5 QSOs in progress on the satellites S1 transponder. The spectrum display is great for seeing where the activity is and the HF radio has DSP and better I.F. filtering than my 2m radios.

The image on the right was taken at MA230 on the 23/Aug/2002 using the new Gemini  S band to 10m converter The peak on the left at -20kHz from the displayed frequency (5kHz per division) is the BPSK telemetry beacon, the peaks to the right are all QSOs. The beacon is normally on 2401.323 but is higher in frequency here due to doppler shift as the satellite approaches the Earth. 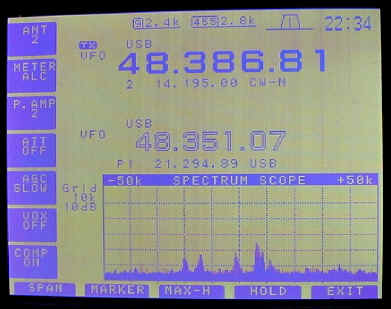 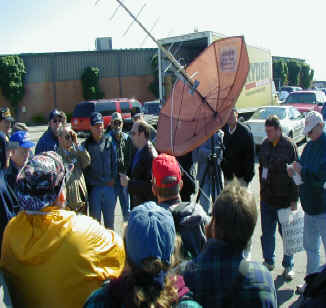 The final photo shows Howard Long G6LVB operating portable from the 2002 Hamvention in Dayton Ohio as W8/G6LVB/P.  Howard's 1.1m diameter umbrella dish may have a strange profile, but was measured with 24dBic gain on the Amsat-UK test range.

So, Who can you work?  Well, in the first 9 months 58 DXCC countries were active on the satellite.

In March 2004, a group from the UK based Five Star Dxer's Association went to the rare location of Rodrigues Island in the Indian Ocean. The equipment shown in the photo below was tested on AO-40 and EME. The 4 x 19 element antennas were shipped in December 2003 ready for operation as part of the 3B9C expedition in March/April 2004.  Sadly the satellite failed before the DX-Pedition stared. During  testing on AO-40 a return signal assessed as 539 on the usual CW scale of reporting was achieved with just 600mW at the feedpoint of the 70cm antennas. At the time AO-40 was 54,000km from the Earth. Further details of the expedition can be found at the 3B9C web site.

Below are some soundclips (.wav files) recorded from Oscar 40 using the 0.8m x 0.6m dish and the drake converter.