The AMSAT-UK  Payload on ESEO

The European Student Earth Orbiter (ESEO) is a hands-on project from The European Space Agency Education Office.  The satellite construction is managed by Italian Aerospace Company, Sitael from their premises in Forli’ near Bolognia Italy.
Sitael are responsible for the structure / Avionics / 70cm TMTC system / Electrical Power System and the on-board data handling system. 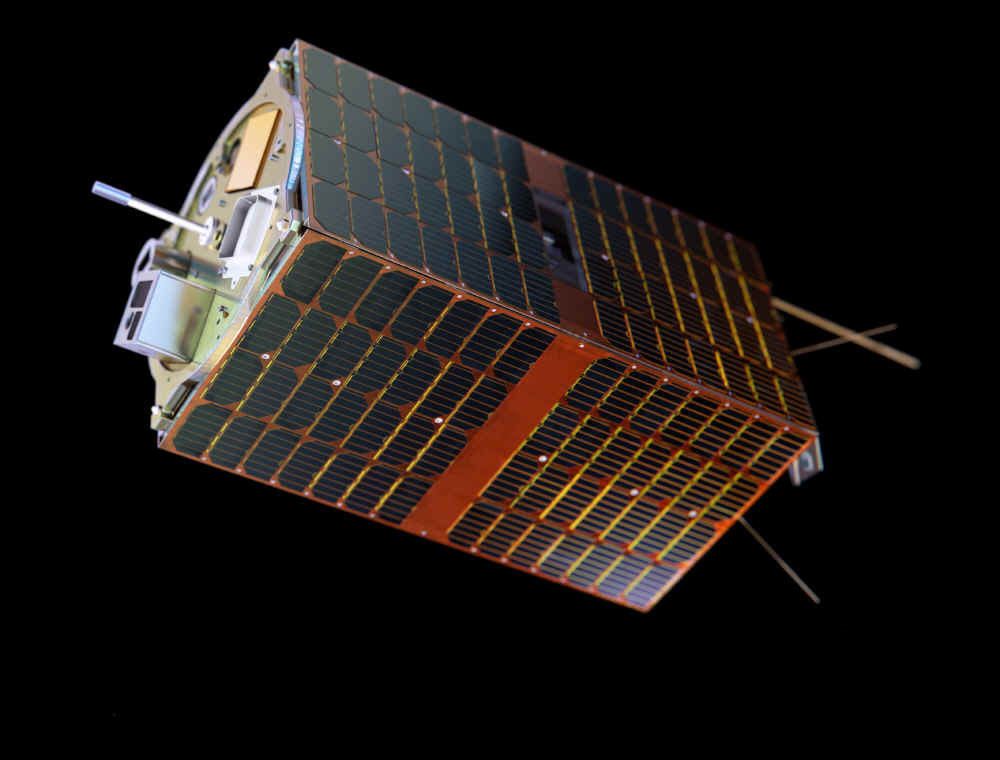 A variety of Science payloads are being provided by Universities across Europe. These include Plasma and radiation experiments, a camera, an experimental S-band communication system that uses commercial space frequencies around 2 GHz and a deorbit mechanism supplied by Cranfield University in the UK.  Other University groups are involved with the Ground Stations as well as data collection and distribution.

The satellite has a design mass of 49kg. Currently ( December 2016) engineering models of the payloads are being delivered to Italy where the EM is being constructed and undergoing electrical and environmental testing. ESEO will be 3 axis stabilised using a combination of magnetorquers and a cold gas thrusters using Nitrogen gas.

AMSAT-UK is supplying a communications payload which will be used primarily to transmit telemetry for educational outreach. This will be in the familiar FUNcube format of 1200 bits per second BPSK with forward error correction. In addition the payload will act as a back up system for transmitting science data, which it will transmit at the increased rate of 4800 BPS.
For amateur radio communication,  AMSAT=UK are providing a single channel L/V transponder for FM with the uplink on 1263.50MHz. A 67Hz CTCSS signal will be required to access the transponder. All of the downlinks – 1200BPS telemetry / Science data at 4k8 and the transponder downlink will use a single frequency at 145.930MHz. 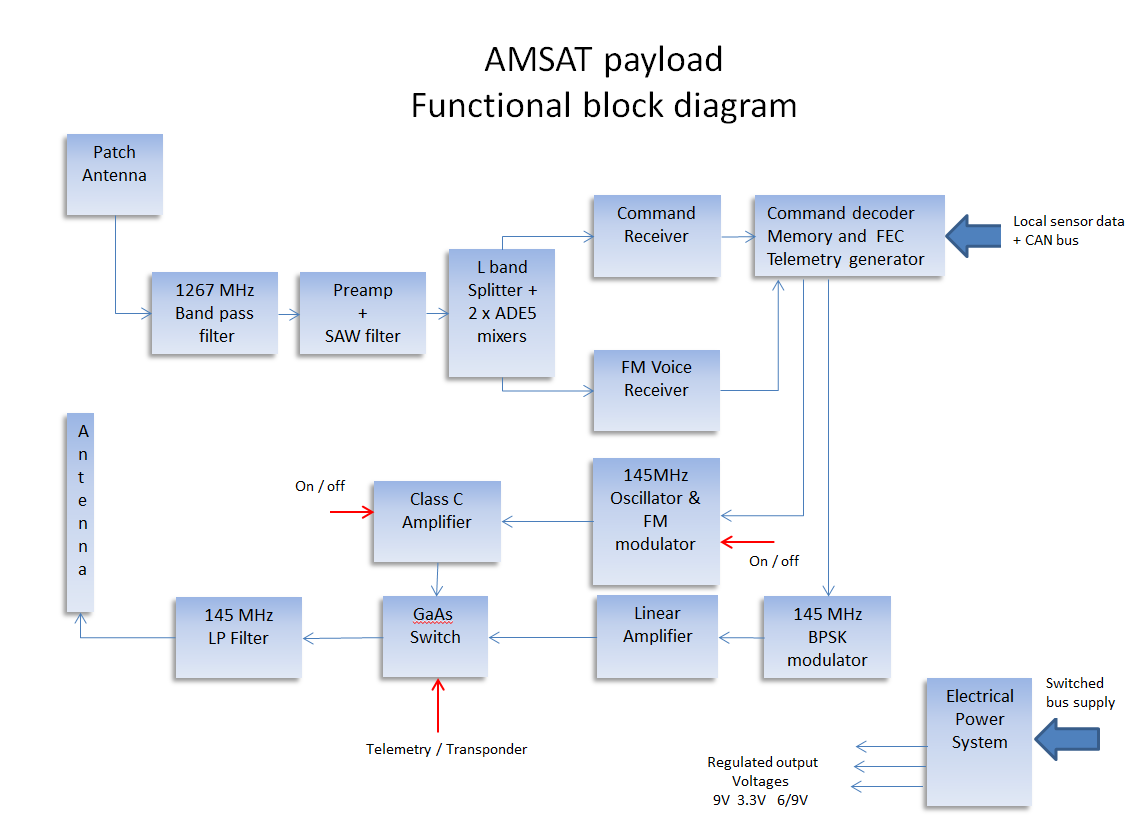 The telemetry and transponder operational times can be controlled in one of 4 ways.
1) By control from the ESEO platform’s scheduler
2) By Eclipse detection in a similar way to FUNcube-1 ( AO-73 )
3) By transponder timer. e.g. From telemetry mode an access tone of 67Hz on the transponder input will allow 5 minutes use before switching back to telemetry mode again
4) Transponder / Telemetry / or Science data modes can be set by direct command from an AMSAT ground station.

Status: 14th Dec 2016
In the last 2 weeks the engineering models of the payloads antennas and other systems etc have been integrated into an EM structure and vibration tested in Italy.  We have been informed that the AMSAT Payload and antennas passed without issue.
Currently the EM is undergoing thermal vacuum testing and this should be completed before the Christmas break.  Although thermal testing includes multiple cycles from -20 to +70 degrees C under vacuum, the team are confident that we will pass this test as we were able to undertake similar thermal tests with the help of Surrey Space Centre prior to delivery to Italy.

Current Status: 24th Jan 2017
In an update from Sitael, we have learned that our payload and the antennas have all passed the vibration tests. That includes random vibration and sweeping with a sine waveform. I have included a video of the sine testing below. It shows the resonance of the VHF and UHF antennas. Our initial estimate is that the deflection of the carbon fibre based VHF whip is less than 10 degrees, which if fine as there is plenty of separation between it and the various Science payloads.
While vibration testing was all positive, the news was mixed with thermal vacuum tests.  After a few hours in a vacuum at 70 degrees centigrade, our payload was switched on. Initially it worked without issue but over a period of time the temperature of a DC-DC converter increased to over 100 degrees.   30+ degrees above ambient.  Quite reasonably it stopped working and we now have to re-evaluate the techniques for removing heat from the device. Fortunately when back at 25 degrees it started up without problem and continued to work down to the lower testing point of -20 C. Another problem to solve, but better down here than in space. 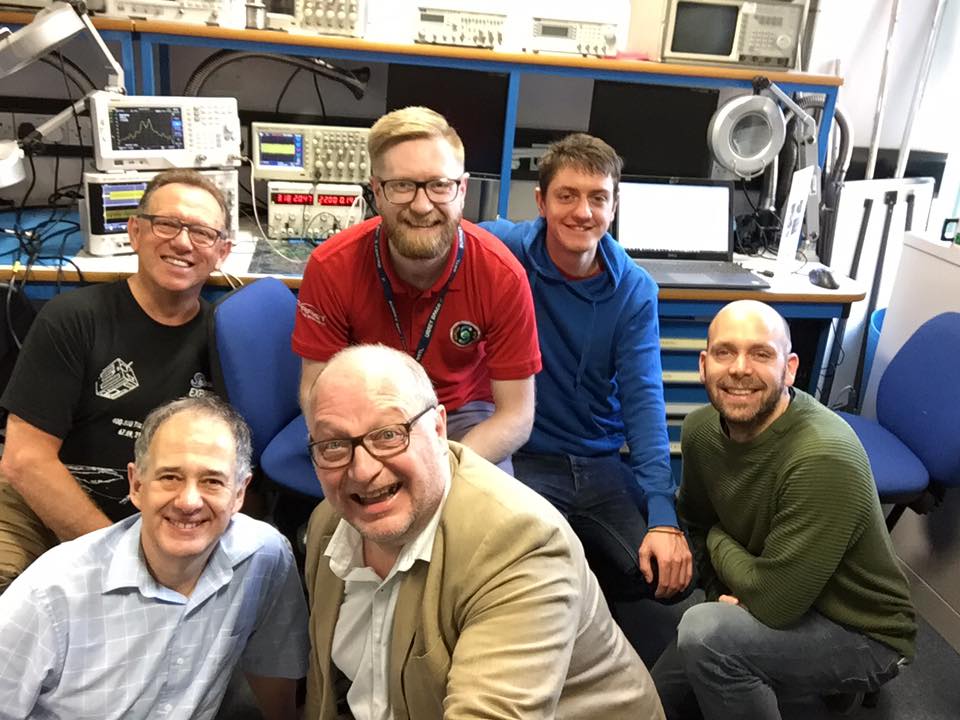 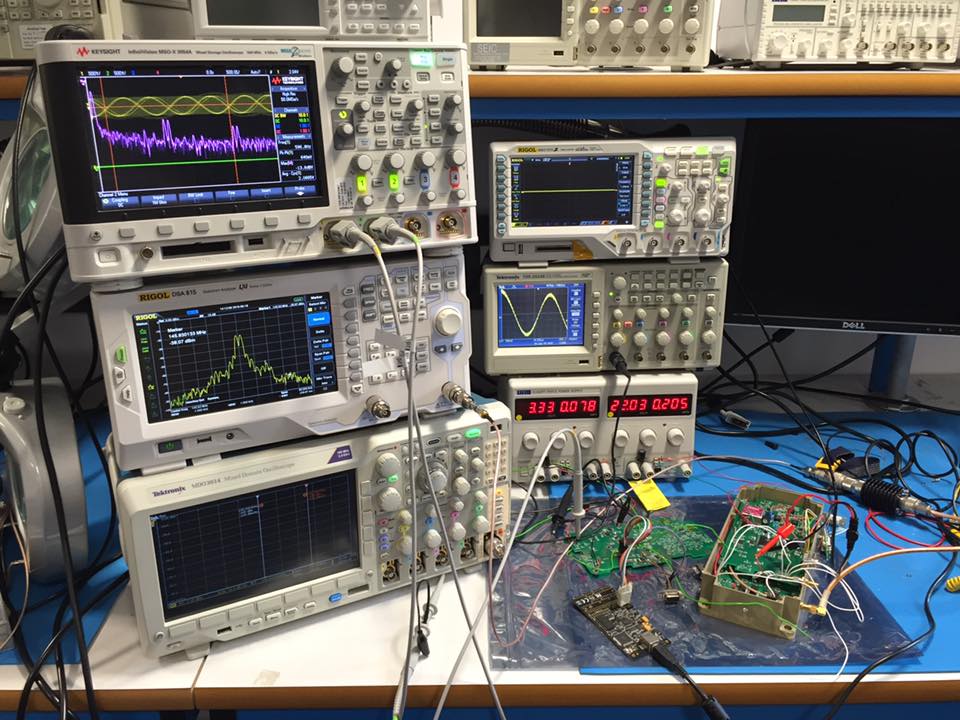 Below are a selection of images from Surrey Space Centre in Guildford UK and at Sitael in Forli' Italy. - Click to enlarge 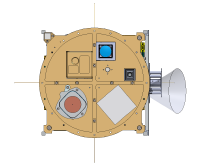 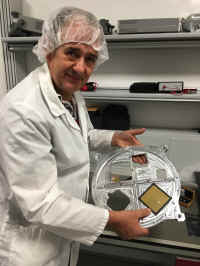 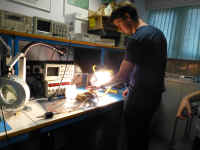 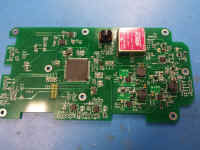 Pictures above from left to right:
1) CAD model of the -Z (Earth facing end of the satellite. They grey square in the lower right is the 90x90mm L band patch antenna for the transponder and command uplink.
2) From CAD to reality. David G0MRF holds the engineering model bottom plate with the L-band patch in position. The patch, which is only 1mm thick, is held in place by Nusil double sided tape.
3) Pete Bartram waits patiently to see if the programming of an over temperature safety switch has been successful. The EM is being heated by a 500W halogen lamp.
4) Dr. Chris Bridges and Pete Bartram MSc working with the ESEO 'Flat Sat' at Forli in Italy (October 2016). Pete is one of the students from Surrey University who have used the ESEO project within their academic studies.
5) The AMSAT ESEO CCT board (Command control and telemetry) This PCB combines the payload's electrical power system with the onboard data handling. Based around the ATMEL AT32UC3C0512C processor it runs a real time operating system that provides 2 CAN buses for communication with the main ESEO OBDH and Science payloads, It collects sensor data via an I2C bus from within the payload and formats it into BPSK ready for transmission to the ground. It also takes audio from the command receiver, decodes and process commands from AMSAT ground stations. 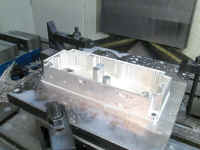 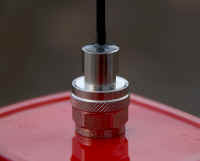 Pictures above from left to right:
1) The enclosure being milled from a solid block of Aluminium. Before this expensive process was started, AMSAT produced a 3D printed enclosure which was used to check all the PCBs fitted correctly and the dimensions met the strict ESA requirements.
2) Commercial organisations undertake extensive testing in a lab. AMSAT does that too, but we also get to take prototypes to the top of a hill and make QSOs with the transponder. Dunstable Downs (UK) in February 2015.
3) Engineering model L-band receivers.  Command chain on the left and transponder receiver on the right. CTCSS decoder is just above the two wires.
4) 2m Antenna feed point. After many design iterations, this N-type with hexagonal flats allows the team to correctly torque the connector to the structure. The radiating element is a length of PTFE coated silver plated wire supported in a carbon fibre tube. The tube is glued into the N-type with a 2 part epoxy designed to work in a vacuum.
5) Transmitter (Engineering breadboard) This board contains the 2 transmitters which are connected to a common low pass filter by a GaAs switch. The board also contains FET power switches and some logic to ensure that both transmitters cannot be powered up at the same time.