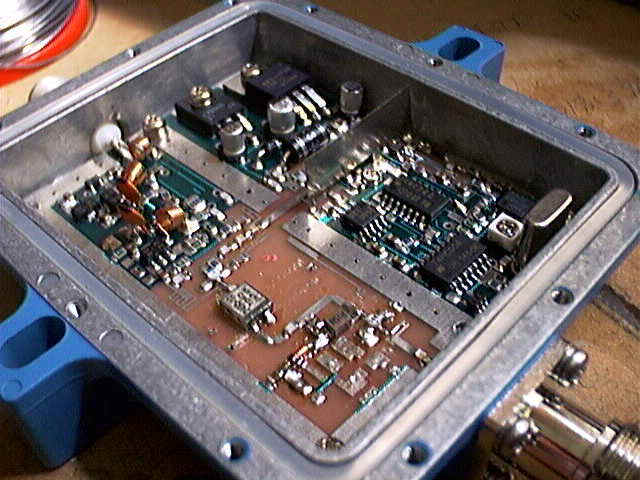 There have been a series of modifications detailed for the Drake 2880. The following improvement was tested at the AMSAT Colloquium held at the University of Surrey in July 99. This procedure is only suitable for Drakes operating in the Satellite sub band of 2400 or 2450 MHz.

A second Drake modified was within 0.01dB ! This modification is consistant.

It is assumed that the following standard changes have been caried out.

1) Crystal changed and IF coils and chip caps removed - JN1GKZ

After these modifications you should already have improved the performance to beyond that of the original manufacturer's specification. 2.4dB noise figure / 28dB conversion gain was the average measured over a two day testing  period at Surrey.

Assessing the circuit for a next step, I identified the image filter as a source of excessive signal loss. The 86576 under optimum conditions should be able to produce a NF of 1.6dB. The Drakes image filter has around 4dB of insertion loss and this is undesirable when the front end is a single device. Additionally, we also saw some interaction between the stripline filter and the small cover which isolates the RF / IF parts of the circuit. In some cases we measured up to 2dB difference in noise figure between "lid on and lid off" - So, the stripline filter has to go!

Finding a replacement wasn’t too difficult. A couple of years back I designed a 2.4 to 432 converter which used a Toko dielectric filter. The filter is centred on 2450 MHz and is used in wireless local area networks (LANs) It has a pass band of +/- 50MHz but more importantly, the insertion loss is only 1dB.

To change the filter requires a little surgary with a modelling knife, the removal of the 3 striplines, fitting 2 earthing pins and the repositioning of the mixer coupling capacitor. 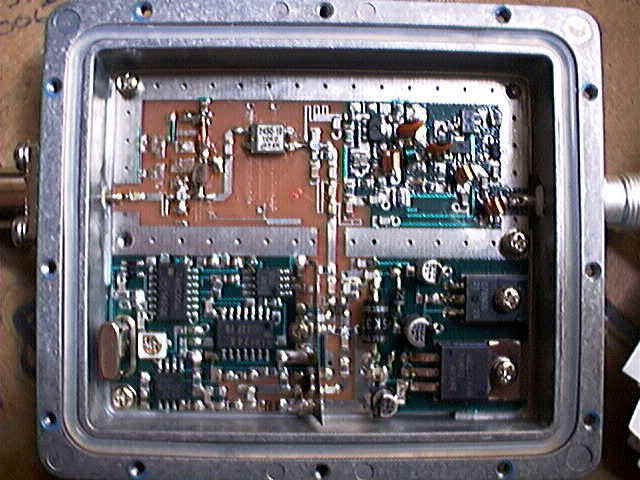 1) Desolder mixer coupling capacitor which is close to the output stripline.- Keep for later!

2) Cut across the input stripline with a sharp knife. This extends the 50 Ohm track which feeds the filter by about 3mm (The width of the stripline)

3) Cut the track between the output stripline and the mixer in the position shown in the photo.

4) Remove unwanted parts of the striplines by heating with a soldering iron and lifting the copper clear of the board.

5) Position the filter on the board and carefully mark the positions for the two earthing pins.

6) Drill the PCB with a 1mm drill ensuring that the drill also marks the diecast case under the board.

7) Remove the board and fit / solder the pins from the top. Cut flush on the underside of the board.

8) Take a larger drill, 4 or 5 mm, and look for the marks in the casing. remove a small amount of metal from the casing to allow  any protrusion from the pins to be recessed into the case. - This allows the board to lay flat when refitted.

9) Refit board into case. Solder filter to 1 track and the heads of the two pins.

10) Solder coupling capacitor directly to the filter output terminal and to the track feeding the mixer. Replace all covers / screws.

You now have one of the hottest Drakes around!

Toko Filters are available from Bonex / Toko distributors or,  from the Author @ Ł4.00