The chosen location was a lighthouse built in 1850 and situated at the remote Northern end of the island.
Like many lighthouses, the Point of Ayre light had been automated some years ago and although the accommodation for a principal lighthouse keeper and two assistants still existed, their cottages have been converted and are available to rent.

The Weekend began with a very long drive from London to Birmingham and then onto the port of Heysham for our ferry to Douglas in The Isle of Man. The island is located in the Irish sea and by the time we reached the lighthouse at the northern most point on the island, it was cold, very dark and it was eleven hours later.

With access to the lighthouse proving a problem, we headed for the beach in Dave's car with his portable transmitter.  A 1.5m copper pipe hammered in at the shoreline served as a surprisingly effective earth, while a 100m vertical antenna was supported by a 2m Delta kite. - The GD Low Frequency operation was underway!

One CQ produced a pile up- the publicity was working. The first LF contact from the Isle of Man was between GD3YXM/P and Reino OH1TN.

The following morning we discovered that we would not be able to use the lighthouse to support our base station antenna. Firstly we could not obtain access and in any case the electronics and control systems generated a large amount of QRM.  Plan B involved fixing a 40 foot mast to the railings outside our apartment. This gave a total height of 55 feet AGL and allowed us to run a wire about 200m towards the top of a long abandoned foghorn tower about 300m along the beach. A loop at the end of 50m of coax was used for receive 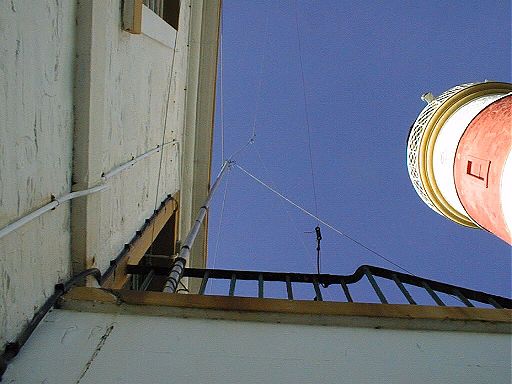 At some points the height of our improvised antenna came within 30 feet of the ground. However, we were still able to achieve an antenna current of 4.5 Amps on 136kHz, so it appeared to be working. 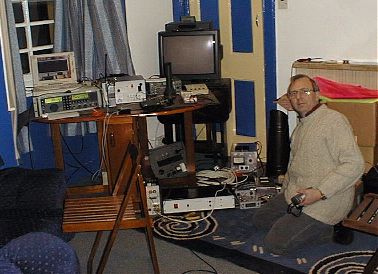 Above:  Graham in the Shack.  Laptop on Racal RX.   73k TX and DDS on floor
Below:  ATU.  Coil with variometer and a 5A thermocouple ammeter 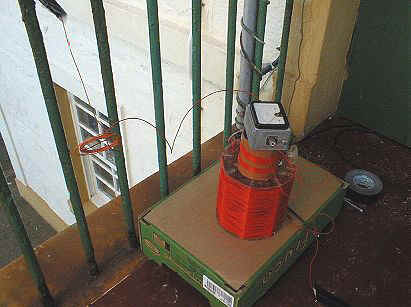 73kHz
While Dave and Graham worked most of the LF operators in Western Europe on 136kHz, I had a small agenda of my own.
An amateur allocation between 71.4 and 74.2kHz is being withdrawn by the UK authorities in June 2000.  I had modified my LF transmitter to operate on the band in class D and hoped to be heard by, or to have some kind of a QSO with, 2 stations located in Southern England.
This was not an easy task. For the first year of 73k, the 2 way QSO record stood at just 120 metres. This was slowly increased and as we arrived on the Island the record was held by Roger G2AJV and my dx-pedition partner, Dave G3YXM. The distance was 244km.  With a wavelength of 4000m, our 200m wire was still a very small fraction of a wavelength and its height above ground was insignificant.

The transmitter loaded into the wire with just a series inductor for matching.  The earth was also very simple. A single radial running at 90 degrees to the antenna 250m down to the sea. Two small earth rods had been joined at 50m and 150m from the TX and driven into the ground. With a 30V supply and a power around 250W, we managed to generate 2.5 Amps of antenna current. - I have no idea of ERP.

Late Saturday evening, I made a phone call to Peter Dodd G3LDO in Worthing. Peter was running Spectrogram software and he confirmed that there was some sign of our slow CW test visible on his computer. However, with QSB, and local noise, 100% copy was impossible. We agreed to wait until the next morning and set a sked for 07.30.

The next morning I called CQ.- Antenna current was down, but then so was the tide, so no surprises there. I had arranged for Peter to use a frequency that was between two "lines" of QRM spaced by 50HZ. Switching to receive, Peter's call appeared on the laptop's screen. - Not strong, it was several dB's down on the interference, but with care you could make it out along with an O report.
I sent calls, an R and an M report. - It was received, and the 73k record had been increased to 480km.
G3LDO sending to GD0MRF on 71.75kHz    (recorded by G3XDV)

As all three of us sat around the equipment feeling rather euphoric and contemplating breakfast, Dave noticed some characters appearing on the screen.
G3X  and then static / QSB.  The mobile rang and Mike G3XDV confirmed he was sending. At the end of the over we replied and sent an M report, but unfortunately no further signals were received from Hertfordshire. With only Mikes call and our report needed to complete, we decided to carry on at 22.00 that evening.
At 22.10 we received Mikes signal and his call but with more QSB what was the report?   There were lots of dashes on the screen but where were the gaps?   A T?   no better,  "there's an M"  but then static. Finally an O.   Calls and reports exchanged....A quick acknowledgement and a second rare and much appreciated QSO on amateur radio's lowest frequency band was in the log.

Thanks  Peter and Mike for a lot of time and effort. 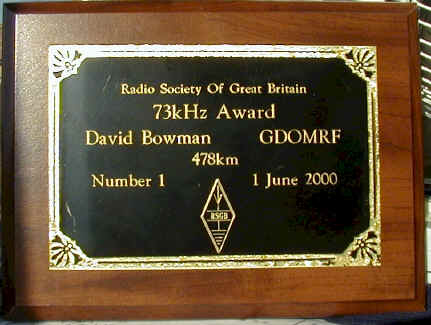 Isle of Man Photo Gallery - All photo's by Dave and Graham. 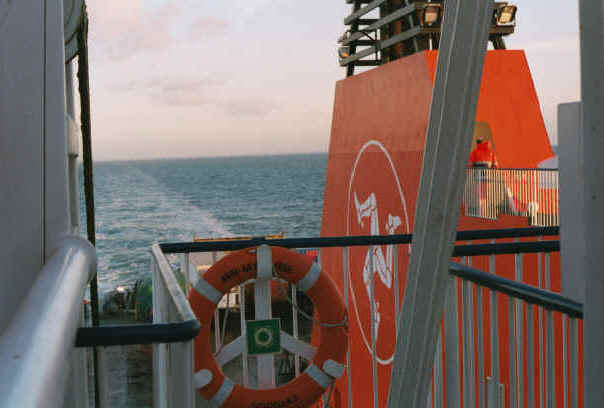 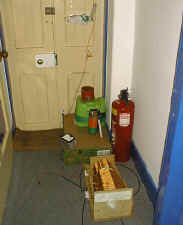 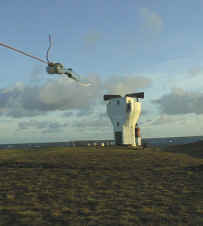 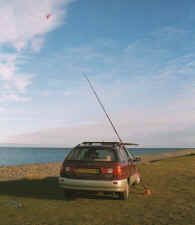