SSETI Express is an 80kg microsat being launched into a Sun synchronous 670km orbit from Russia in Sept 2005. More details can be found at the SSETI website.

With just 12 months to launch the SSETI group required an RF downlink transmitter in a hurry. It needed to be capable  of providing a data rate greater than the 9600 BPS AX25 system used on the 437MHz UHF Transceiver. The downlink will carry telemetry from the spacecraft and data from the onboard camera and other experiments.

Amsat-UK rose to the challenge and assembled a team to design and build an S band transmitter capable of a data rate 38k4 using FSK.
The transmitter is crystal controlled and is on 2401.840 MHz. In return for the data facility SSETI agreed that after the satellites main mission had been completed the S band unit would be changed from data, to voice transponder mode.

The S Band project began on 16th June 2004 with a planning meeting. Delivery of the completed flight version of the transmitter was scheduled for mid September, allowing just 12 weeks to design, prototype  build and test the flight hardware before delivery to the European Space Agency  integration facility, ESTEC, in The Netherlands.

The S Band power amplifier was built by Charles Suckling G3WDG. It is a two stage FET amplifier module and is identical to the unit successfully flown on AMSAT AO-51.  Power output during initial testing was 3.2 Watts.

General description:
S Band drive / modulator.  The drive uses a crystal oscillating at 100.075 MHz which is modulated by either data from the On Board Computer (OBC) or audio from the 437 MHz UHF receiver. The 100 MHz is multiplied in 3 stages by 24 times to give +13dBm. Temperature coefficient is 5ppm and the crystal is specified from -10 to +40 degrees centigrade.

The sensor board monitors RF output power, PA heatsink temperature and the power level being received by the UHF receiver (RSSSI).  It provides 3 outputs for use by the telemetry encoder which can downlink these parameters as one of 256 levels via a pair of DTMF tones. This self contained telemetry system will continue to function in the event of a total failure of the on-board computer.

Control and logic board:
This board provides all the logic and control functions for the transmitter. The primary controller is a GAL.
Functions provided are: CTCSS decoding for use in 'transponder mode'. Audio switching / mixing between data from the TNC and voice from the UHF receiver. Mode switching within transponder mode. Generation of basic telemetry from an A/D converter and subsequent modulation onto the audio output. Command decoding.
In transponder mode SSETI Express will transmit the unsquelched audio received on UHF for 4 seconds following the loss of 67Hz CTCSS.

Antennas:
The output from the S Band transmitter is split 3 ways by -6dB -6dB -3dB. These outputs feed three RHCP patch antennas located on the +X  -X and +Z axis of the spaceframe. The splitter / antennas / and enclosure for the S band unit has been provided by Warsaw University in Poland. 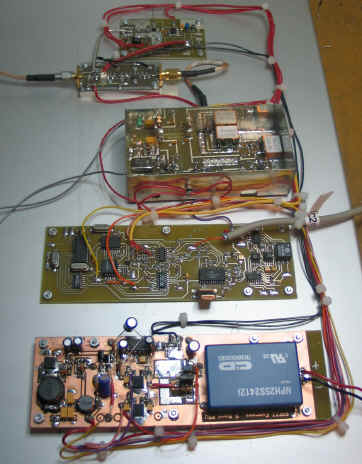 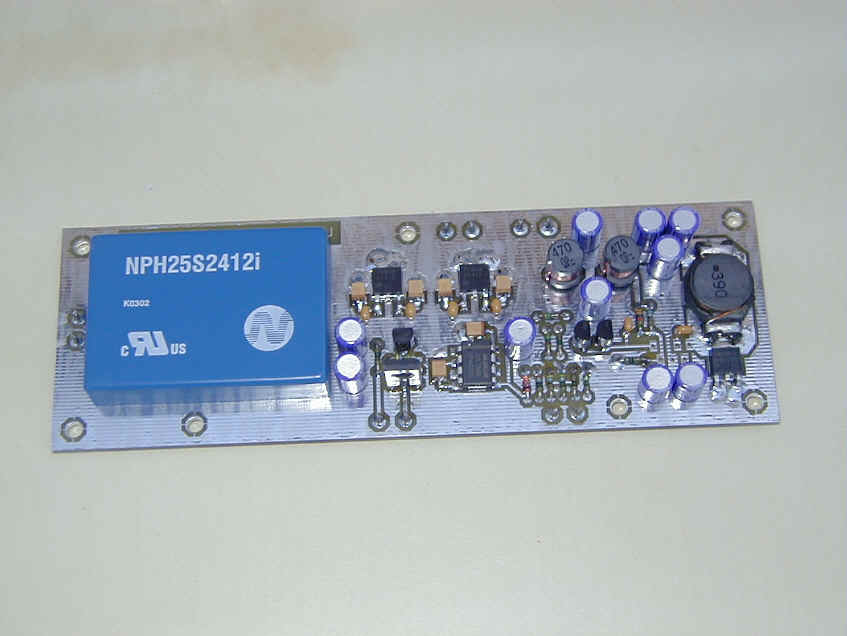 The flight version of the S Band unit SMPSU board.

The flight version looks a little different from the prototype. The power supply converts the 28V from the satellite into the various voltages required for the S Band unit.

Also provided on the board is a safety interlock for protecting the GaAs FETs against lack of bias voltage and an interface for switching power to the PA and the TNC. 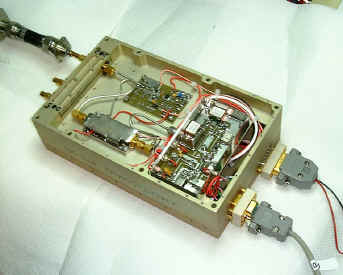 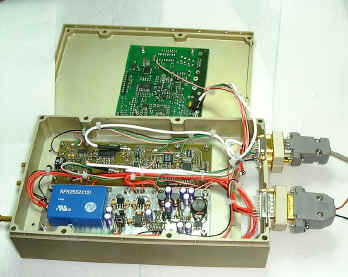 The completed 6 PCBs fitted into their enclosure. The wiring was subsequently changed for space qualified materials and glued in place prior to thermal vacuum and vibration testing. 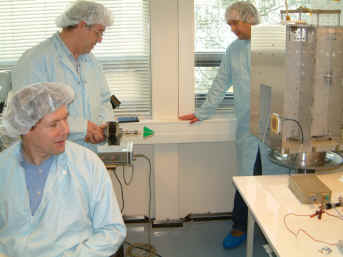 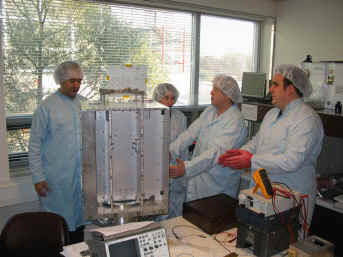 The S Band unit has an integral telemetry generator (see above) The values for S band power amplifier temperature, output power and UHF RSSI are encoded as a short burst of DTMF tones once every few minutes Each channel has a resolution of 256bits. A windows telemetry decoding programme is available. This uses a PC soundcard to read the tones and to display real values of Power in Watts, Temperature in degrees C and RF power input to the UHF receiver in dBm.
The decoding software, written by Howard, can be downloaded from:

Power System:
The satellite will be powered by an array of solar cells. The cells are arranged into strings of 15 which generates a voltage compatible with the 28V used throughout the satellite. In total there are 150 solar cells fitted to the X and Y faces of the satellite.

The batteries on-board SSETI EXpress are 6 series connected Lithium Ion cells. Each cell is charged at 4.2V and has a maximum capacity of 6.8AH

With any polar orbiting LEO satellite, the visibility per orbit increases the further towards the poles you are. The pictures below show a remote groundstation located at an ESA facility within the Arctic circle. With such a northerly location the groundstation will be able to receive data on most orbits. 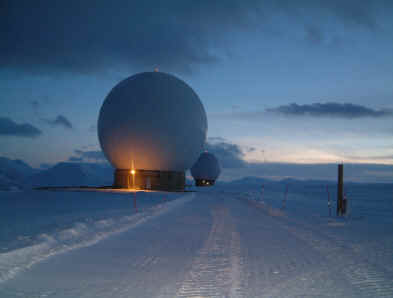 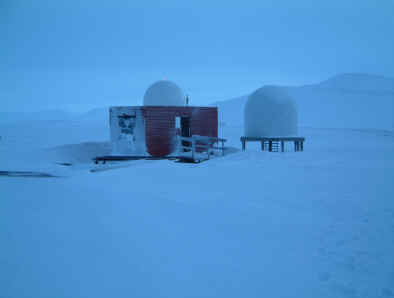 With the many different modules completed and tested they all have to be integrated into the structure of the satellite. This process can be viewed in near real time by looking at the SSETI Express Cleanroom web cam. (lower right)
The picture to the lower left shows a member of the SSETI team working on the solar panels. Also visible in the photo is the UHF antenna on the upper surface and one of the three S Band patch antennas to the lower right. 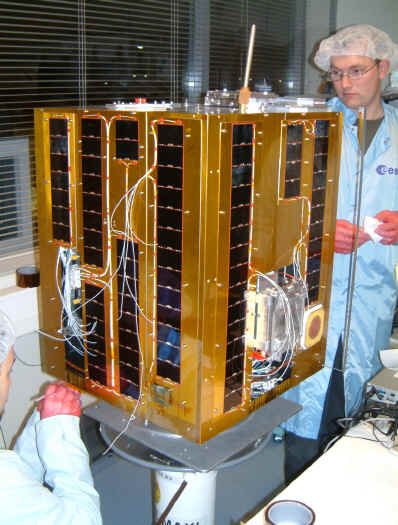 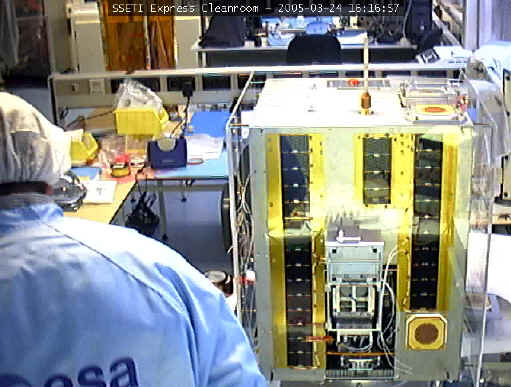