This paper describes a mode UV (435MHz / 145MHz) transponder with gain and AGC optimised for space.

Over the years there have been rare occasions when an opportunity arises to provide a payload for a satellite. There are however always many constraints, usually time....Can you build this? can we have it tomorrow? we don't have much power budget. It needs to have almost no mass etc etc.

On the off-chance that such an opportunity should arise in the future, I decided to design and construct a mode U/V transponder as a technology demonstrator. The transponder with its 435 uplink and 145MHz downlink is designed in modular form. The rational behind this was that the specification for each module could be set and if any changes were required then only a small part of the overall project would need to be re-designed. This approach would allow quick progress and development. Modules could be removed and replaced for other modes e.g. L/V  U/S  U/A etc.
The hardware presented here is not designed for flight but to provide a demonstrator which can be used to develop skills and measurement techniques that would then allow the rapid development of a version suitable for flight.

Transponders for space.
The design of a transponder for use in space differs fundamentally from a terrestrial equivalent. Components used, front end filtering and automatic gain control (AGC) characteristics need to be chosen carefully for space operation. Of these, the dynamic range required in space is substantially less and therefore eases the design of the IF section and the AGC. When operating in space the input sees signals transmitted from several hundred kilometres below the transponder. These  will encounter perhaps 140dB of path loss whereas in terrestrial operation a signal from just 1km would have 85dB of path loss before reaching the input of the transponder. As you can see there is already a difference of 55dB in dynamic range requirement.
While AGC design is simplified, filtering, due to the small separation of antennas, tolerance to temperature changes and vibration and the vacuum of space make other aspects of design more arduous.

The receive section converts the incoming 435MHz signal to 53MHz and then to the final IF of 10.7MHz. The final choice of 10.7MHz was selected due to the availability of a wide selection of 'off the shelf' filters and tuned transformers. Single conversion to 10.7MHz is not practical as image rejection would be poor. All three of the main modules (telemetry excepted) are built on PCB with a plain copper underside as this represents the most robust method of mounting and would minimise vibration damage. 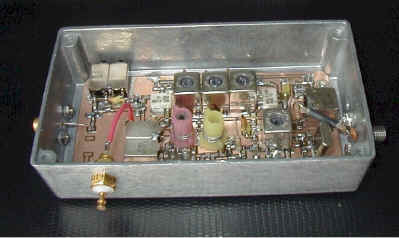 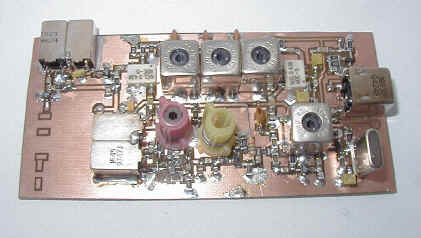 Because this transponder will not be operated in space I have omitted the input filter and pre-amplifier. The circuit here has an input amplifier followed by a helical filter to provide the image rejection.
The local oscillator circuit uses a single crystal to generate both first and second local oscillator signals. The crystal is apx 64MHz. The oscillator is amplified to 10mW and then divided with a resistive splitter. One output is used for the second LO and the other is multiplied in a frequency tripler and then a doubler to reach the first LO of 382MHz. The 382 is filtered with a helical filter before passing to a diode ring mixer.
The first mixer has an output at 53MHz. The output is filtered by a 3 element L/C filter and after more amplification is mixed with a 64MHz local oscillator to produce  10.7MHz. Note that the second mixer is inverting and that overall this transponder will invert signals between input and output.
The output of the second mixer is applied to a diplexer. frequencies higher than 30MHz are routed to a resistive load while frequencies below 30MHz are passed to an amplifier that is tuned to 10.7MHz. The output of the amplifier is transformer coupled and has a low impedance output.

The IF system has an input and output at 10.7MHz. This module takes the input signal and applies it to a series of amplifiers. I have chosen to use broadband amplifiers and filters and not the tuned narrowband amplifiers as I believe the response to temperature changes and vibration are likely to be much better with the amplifier and filter approach. The first filtering is achieved with two cascaded 10.7MHz ceramic filters. These have bandwidths of 280kHz and 100kHz. After restoring the signal level with another amplifier the 10.7MHz is applied to the main crystal filter. This sets the overall bandwidth of the transponder. In this case the filter is an 8 pole crystal filter with a measured bandwidth of 33kHz. The filter has an impedance of 5000 Ohms.  The IF board also has an auxiliary output for a DSP based IF processor being developed by Howard Long G6LVB and has a summing mixer to allow the injection of a telemetry signal just outside the 33kHz passband.

For details of Howard's DSP IF - See:  http://www.g6lvb.com/Articles/stella 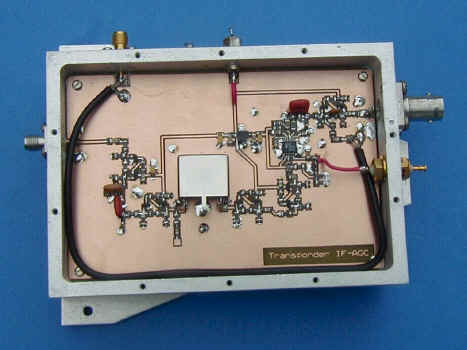 IF and AGC module:  Connections clockwise from left.  Input, telemetry sub carrier input, 9V DC, IF out and RSSI output.

After filtering the signal is buffered and applied to the AGC amplifier. This Analog Devices product has internal variable voltage controlled attenuator adjustable to give overall -2.5dB to + 42.5dB range. It also has an internal AGC detector and an RSSI output which produces 0 to 900mV DC output scaled in a linear 20mV per dB of AGC change. This can be used for telemetry generation.
Following the AGC, the signal is filtered with a ceramic filter. This is necessary to remove harmonics produced should the circuit be over driven. A buffer allows telemetry injection and sets the output impedance to 50 Ohms ready to be sent to the final upconverter.

The final module converts the 10.7MHz to the output frequency of 145.955MHz.
A local oscillator is generated from a 3rd overtone crystal at 67.7MHz in a 2 transistor butler oscillator. The second transistor is tuned to the second harmonic and that circuit is top coupled to a second resonant circuit. Output power from this arrangement is +5dBm and that 135.255MHz signal is applied to a diode ring mixer.
10.7 + 135.255 = 145.955 MHz. The mixer is followed by a small attenuator and amplifier followed by an LC top coupled bandpass filter. An amplifier, helical filter and two further amplifiers followed by a 2 section low pass filter complete the upconverter module. 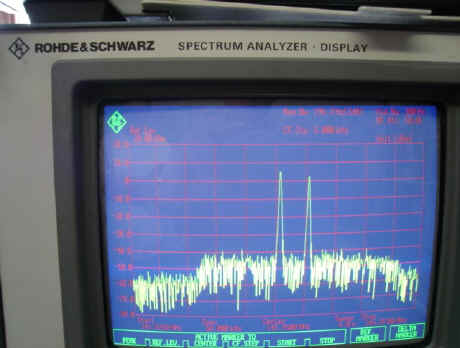 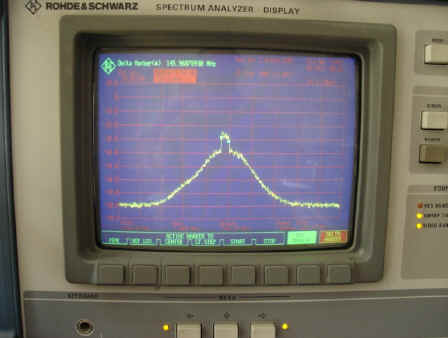 LEFT.  The transponder passband on 2m, showing the output signals generated when applying two 70cm signals at about -90dBm signals at the input.
RIGHT.  Transponder noise floor.  The crystal filter is the rectangular section standing 15dB up from the noise generated by the AGC when at max gain.

Note
1)  (left) The signals are already 45dB above the 33kHz wide noise floor.
2)  (left) The absence of any 3rd order intermodulation products
3) The noise in the 33kHz b/w of the crystal filter can be seen about 15dB above the noise level generated in the AGC amplifier.

I would like to thank Sam Jewell G4DDK for his time and expertise and for conducting the test and measurements.