This screenshot, taken by John Currie VE1ZJ, is a record of the first reception of a Transatlantic amateur radio signal on the 136kHz LF band. John was listening at his home in Nova Scotia (FN95RU) for signals transmitted on 135.711kHz  by G0MRF/P.

After identifying the signal, John completed the first LF transatlantic crossband QSO by working on 14.043MHz. The total distance covered was about 4332km. This effectively doubled the distance record for the 136kHz band.

John's call can be seen from the center to the right of the screen.  V E 1 Z J

This transatlantic QSO started back in London as an experiment to try and build a loaded  inverted V dipole for the LF band. Anticipating a large signal, I e-mailed John in Canada and Brian CT1DRP to advise them of the tests and to ask, rather optimistically, to look for the signals. 135.71kHz was chosen as it is at the lower band edge, just clear of the Greek data transmitter and as far away as possible from the Canadian military transmitter CFH (137.7) which is located on Nova Scotia a couple of hundred kilometres from  John's Cape Breton Island QTH. 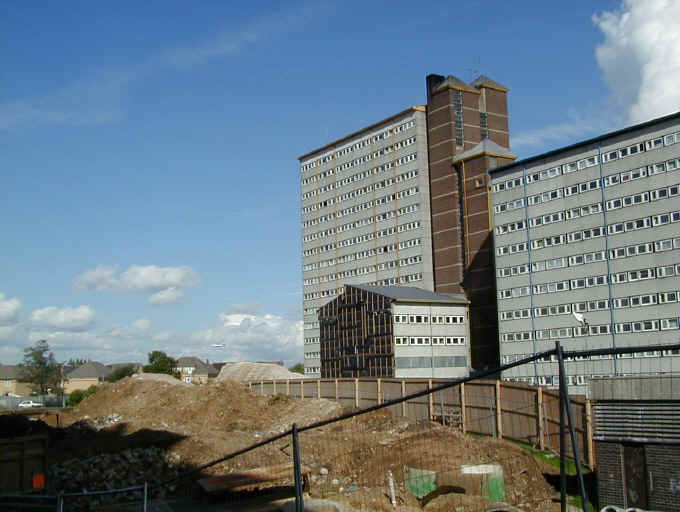 Due for demolition and surrounded by a building site, but what a great location for an LF antenna!
(You can just make out an aircraft on final approach to Heathrow)

The site selected in England for this /P expedition was just 2 miles from my home in West London.
Sean Griffin, 2E1AXK, is a UK Novice licence holder. Sean lives in a top floor apartment in a 15 story tower block in Feltham West London (IO91SL). Sean had joined Tony G7DGW and me in erecting 2 x 250 foot wires which were the basis of the experimental dipole. The wires were passed out of the window at an angle of about 80 degrees to each other and 45 degrees to the building. The ends were 30 feet above ground and were tethered by nylon fishing line.
Sadly our planned dipole antenna failed to work. After about an hour of warming up the loading coil, we made the decision to parallel the two wires and to load them up against the miles of copper pipe contained in the tower block's plumbing system.

With the two 250ft wires paralleled, they were connected to a basket weave loading coil made from 54 conductor  Litz wire which had an overall diameter of 10mm. This was connected in series with  a much smaller coil. One end of this was connected to ground and the RF was tapped in about 5 turns up. With this arrangement the antenna was resonated and matched very quickly with the aid of a reflectometer coefficient bridge and an oscilloscope. (Eurotek Rad Com 9/2000).
The transmitter was an ex Decca unit capable of generating 1200 Watts. This was set up with a switched mode power supply and 15 amps at 58Volts flowed into the transmitter. With 'just' 870W input and about 700W output the thermocouple ammeter in the antenna peaked at 7.2 amps. A PC running  ON7YD's QRS software generated the slow CW necessary for the transatlantic path. With each dot taking 3 seconds we sat back and kept an eye on the equipment and the fan keeping it all cool. After about an hour the phone rang. I had half expected it to be Brian from Portugal but I was very surprised to hear John calling from Canada. He explained that he had perfect copy and described exactly the part of my call being transmitted at that moment.

Suggesting 40m for a crossband QSO, I went back and stopped the computer and then programmed it for John's callsign (the image above). I listened to 40 and heard  absolutely nothing from Canada. Surely our moment couldn't be lost because we couldn't make it across the pond on HF! Not willing to accept defeat we retuned to 14.043 on 20m. Fortunately John was S9+10dB on this band and we received an 'O' report. In just a few minutes we completed the formalities with an acknowledgement and a report to John. With all confirmed, the first 136kHz crossband amateur radio contact across the Atlantic was in the log timed at 00.08 UTC on the Sunday 10/Sept/2000

Subsequently, we switched our wire antenna to receive. John had told us of another Canadian amateur who was transmitting for the last 10 minutes of each hour.  At 00.50UTC  we tuned to 136.500. Our antenna was connected to a bandpass filter and preamp and this was used to feed RF into an Icom IC756. With the audio from the IC756 plugged into the sound card of the computer we looked very closely for any trace of Jack VE1ZZ. The Spectran software digitizes the audio and displays the signals on the computer monitor. This is the equivalent of using a CW filter that is less than 1Hz wide allowing you to identify signals that are below normal noise level. With an entire display showing us just 40Hz of bandwidth we could see nothing on the frequency we had been given. A few minutes later at 00.55 I saw a series of 10 second dashes appear on the screen. Unfortunately they were not on frequency and a quick recalibration indicated they were on 136.508.  Well it didn't look like interference to me so I made a quick call to Jack.
" Hi Jack.....I can see some signals here but they are 8Hz high. Is that you?"
"Hello David.  According to my counter it's only 7Hz high"

Well, that was fine with  me and I was delighted to tell Jack that his signals had been received over 4000km away in London. Jack was using a two valve amplifier with an antenna that was an average of 60 feet high but 900 feet long. With no computer available At Jack's QTH, a two way QSO was not possible.

A great evening and a big step forward for LF, but that elusive 2 way transatlantic QSO still awaits.

G0MRF transmission as seen in Sweden
As a comparison, Johan SM6LKM spotted my signal during the QSO and managed to record this image. The plot below shows the slow CW very well  and Johan reported the signal was clearly audible in his receiver. In the spectrogram below the vertical lines are local QRM while the wide signal going across the screen above my call is the RTTY signal from Greece. 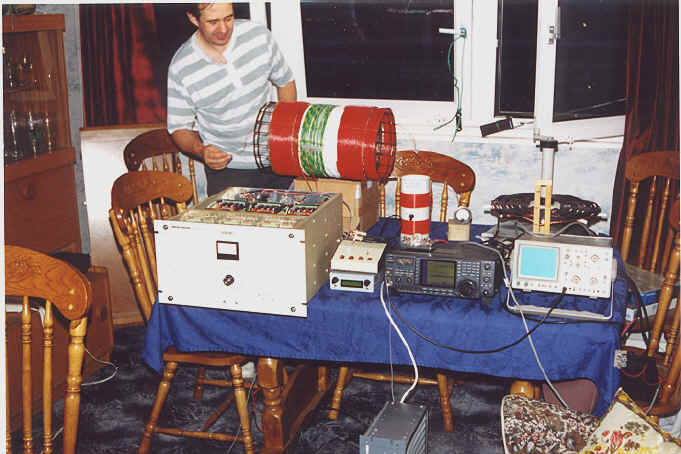 Sometimes I wonder if Sean's invitation to operate amateur radio from his apartment was really just an invitation to bring a VHF handheld. As you can see, we ended up with a lot of equipment, but it did include some handhelds so we could communicate with each other as we erected the antenna.
From left on table (front):  Decca 5501 TX,  SM6LKM/G0MRF DDS signal source with memory keyer on top,
Just visible on keyer is the reflection coefficient bridge, IC756 and Bencher key, Oscilloscope.
At back of table: Loading coil for our dipole experiment with coupling winding, variometer, RF ammeter (8A FSD) and the basket weave variable inductor.
The grey box on the floor in the foreground is a 1kW switched mode power supply. Not visible is the PC used to generate and read the slow CW.

The Antenna Question
There are a number of  'unknowns' regarding the antenna performance used in this transatlantic QSO. A simple calculation of effective antenna height suggests that 700W would be excessive for the UK 1W ERP limit. However, recent field strength tests by a number of amateurs across Europe have shown that the anticipated ERP from a typical amateur LF antenna always falls below that of computer prediction. This is probably due to inaccurate modeling of all the objects contributing to losses in the system. 250 feet is just 12 degrees at 136kHz and losses when using such a short antenna are important. Two months ago a similar antenna was set up on the same site and the ERP was calculated from field strength measurements taken by M0BMU at a distance of 36km. On 9/9/00 we just turned up the power to compensate.  Did feeding the antenna at the top of the vertical increase the efficiency?  Did positioning the wires on the west side of the block i.e. facing the Atlantic, give added signal in that direction due to reflection from our plumbing system 'elevated' earth? It's difficult to imagine the 'earth' but the building is built on a NNE -SSW line and is about 250ft long and 180 feet high. Our 15mm copper earth pipes and the electrical wiring earth, which is connected to it, would be distributed throughout this large area. 12 hours after we installed it, the antenna was dismantled and the opportunity to make further measurements was lost.