Powering external pre-amps from the Drake.

The Down East Microwave pre-amp is becoming a  popular choice for high performance S Band reception.
The kit is easy to construct and is very repeatable. Having recently assembled one, I decided to use it with one of my spare Drake converters. The Drake had the crystal changed and the IF modified to 144MHz. It also had the 3 filter lines extended but I retained the original Drake GaAs FET front end.

But how to apply DC power to my new pre-amp?  It seemed a shame to feed power to the Drake down the coax and to have to open up the drake and the pre amp to link D.C. through.

However, although it's not mentioned in the assembly notes, the folks at Down East have printed an RF choke onto the 13ULNA PCB which allows DC to be fed via the coax.

The following is one method of doing this.
I've found a point in the IF part of the Drake which has 10V on it. If that is coupled to the input N-type connector via an RFC and decoupling capacitor you can send the 10V DC to the DEM pre-amp.
The problem is that the N connector has 2.4GHz on it. Any lengths of wire, even leaded components, will affect the matching and either reduce the performance of the Drake, or perhaps even worse cause the stage to become unstable.
So far the technique below appears to work. The stability is fine and the addition of the extra components did not appear to affect performance of the Drake alone.  So far, I've not checked the noise figure, but I'll do that at Surrey in a couple of weeks. However I can hear UO-11 with the DEM/Drake/Helix, so I'm cautiously optimistic. (Results below)

A Toko 150nH surface mount inductor and 47pF chip cap mounted at the N connector.
The inductor is mounted on top of the existing coupling capacitor at a slight angle. The end nearest us in this view is higher so that there is plenty (?) of clearance from the track leading to the gate of the GaAs FET. The 47pF is mounted on its side so that it does not obstruct the cover.

Complete with wire for the 10V DC. This is run off the PCB, close to the lid of the cover and as far away from the LNA / LO and filter lines as possible.  The small antenna is a  WA5VJB 2.1 to 6GHz log periodic. 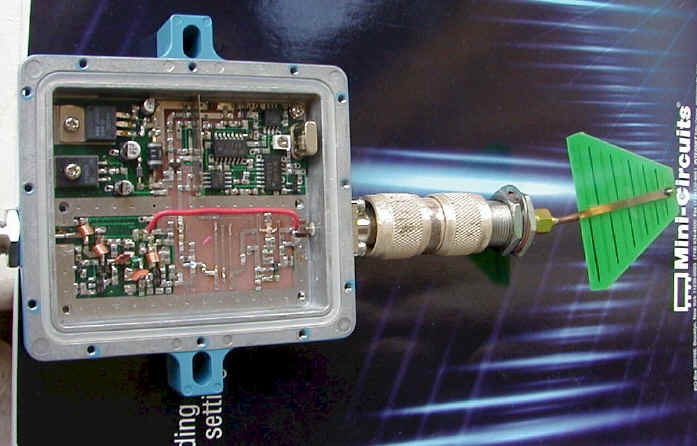 This shot is just to show the 10V supply wire and its routing.
In use, the covers would be replaced and the DEM preamp, with a chassis mounting male N-type, fits directly to the Drake.  (BTW the antenna PCB is available for abt $5 in the USA or £4 / £5 in the UK)

DRAKE TESTED.
The drake and DEM converter combination was tested and found to have a combined noise figure of 1.13dB
The unmodified Drake had a noise figure of 6dB which is a little below average for this type of converter.
This combination is now fitted to my 80cm dish and is in regular use on AO-40.