Crossing 'The Channel' on 670nm

The English channel may only be a 22 mile stretch of water separating England from France,  but over the years, there have been many and varied attempts to cross it. From the first successful flight by Louis Bleriot in 1911 to channel swimmers, wind surfers hang gliders, even an attempt to drive across in a converted VW beetle - which sank half way. Our chosen method was to cross it  using lasers and to have a 2 way QSO which would also be a first between England and France.

Allan Wyatt, G8LSD, Derek Atter, G3GRO, and I each had laser transmitters and receivers and after a few local QSOs had set our sights on 'the channel'.  The compatibility of our laser systems had all been proven at a meeting at the Crawley amateur radio club and subsequently over distances between 15km and 22km. initially we anticipated few problems extending the distance to the required 34 - 40km between Dover and the French coast near Calais. So in December 2002 we arranged that Allan and Derek would operate from Caple le Ferne near Folkestone while I joined the exodus of English day-trippers Christmas shopping in France. In recent years the cost of crossing between the UK and France has reduced dramatically. Daytrips in particular are very cheap especially if you book in advance and travel after mid-day. Armed with my special offer £15 channel tunnel ticket ( www.eurotunnel.com ) My car and I emerged from the 35 minute journey near Calais. The selected site was at Cap Blanc Nez just to the west of Calais, JO00UW, which has an impressive view point at the top of a 400 foot high cliff.  At dusk I looked across towards Dover, but the town, its cliffs and Allan and Derek's site were obscured behind a blanket of mist. Although we were able to communicate via the 2m talkback, the powerful 1 million candlepower spotlamps were unable to penetrate the gloom.

Two months later and another special offer, we tried again. This time I was able to make out a line of bright street lamps to the East of Dover but the visibility towards Folkestone was again poor.  At 220 miles per round trip from London the ticket cost was bearable, but the petrol costs were escalating! between us we had now accumulated more than 700 miles.

Finally, in early May 2003 we tried a third time. On the previous visits I had noticed that there had been better conditions to the East of Dover and based on that, Allan and Derek had found a site near a military communications tower. Hopefully the tower and its lights would be easy to see from France.
The drive from the Eurotunnel station to Cap Blanc Nez passes through the picturesque village of Escalles. As we came out of the village, I glimpsed the sea for the first time and was surprised to see a small square structure on the English side. This turned out to be the nuclear power station at Dungeness and when we arrived at the view point we were greeted with unobstructed views of an 80km portion of English coastline. This was looking good. 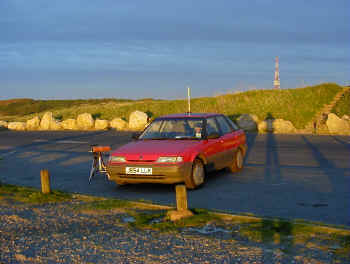 With a pair of 10x50 binoculars I could see the communication towers on the English side. I placed a small twig in the ground in line between the laser transmitter and our target. It's easy to see in the daylight, but a row of lights can all look very similar at night. With 2m talkback I established contact with Allan and Derek who confirmed that could see the red and white mast behind our site. As the sun went down, Allan pointed a spotlamp in our direction which we saw immediately. With something to aim my laser at, I placed a handy case of Belgium beer on the morse key and began to adjust the vernier adjustments on my  laser TX.

Suddenly 'OK that's it' came over the 2m link and Allan confirmed that he had seen a flash of red from the French coast.  I asked for the audio from Allan's receiver to be played down the 2m link and slowly moved the laser's vernier  back. A small tone with a lot of noise came over the radio and within another 5 minutes and more fine adjustments a very loud and distorted tone came over the 2m talkback. Allan confirmed that the signal was so strong that it was overloading his receiver.
With one transmitter on target, Allan Switched to transmit and I watched for a tell tale flash of red. 5 minutes of swishing later and nothing. Having gone back and forth we realised that driving over the fields to the site the optics had been knocked out of alignment. Allan's transmitter uses a 3mW laser diode but he has fitted a beam expander which decreases the divergence. This makes the beam appear brighter but it has the disadvantage of making the aiming very difficult. Eventually I saw the slightest flash of red and with my receiver playing the audio back to Allan, he managed to get his transmitter pointing in the right direction. With the hard part completed the QSO was straightforward. Reports were exchanged, 589 for Allan and 599 for me.

The laser of G8LSD/P as seen from the French coast near Calais 05/05/2003. The lights to the left of the laser are the high powered floodlamps at the UK port of Dover. The distance across the photo is about 2.5 miles. Distance to the laser is 34 km / 22 miles.

With the first laser QSO between France and England completed, I looked for the 5mW signal from the laser pointer used in Derek's transmitter. During the previous 30 minutes Derek had been monitoring my laser signals from France and it only took a few more to align his transmitter. Strangely, Derek's laser although being higher powered, looked significantly less intense than Allan's.  Having exchanged details with Derek and with another QSO in the log, we decided to estimate the beam diameter of the 3 lasers over the 34km path. The results were quite interesting. My system, built from parts supplied by Roithner Lasertecnik in Austria, was about 120 feet diameter while Derek's system based on a simple laser pointer was about 250 feet across. However, Allan's transmitter, with the beam expanders, was just 40 feet wide and when I moved about 10 feet to the East, the signal rapidly faded.  The beam expanders had reduced the divergence to just less than 0.4 milli radians. Very bright, with terrific potential for long distance, but difficult to point.