The following text is an updated version of the original article published in
The LF Experimenter's Source Book edited by Peter Dodd, G3LDO, and published by the RSGB. ( 2nd edition - 4/98. )

The amplifier circuit  has also been published in Radio Communication's Technical Topics  (RSGB), Break-in (New Zealand), CQ DL and has been featured in publications in Poland and the USA. The current version of the amplifier 4/99 ( different  FETs and increased supply Voltage)  is capable of about 350 Watts output. Components in the kit have been revised to allow higher power output i.e. thicker wire for the transformers etc.

A Quarter Kilowatt Amplifier for L.F.

The amplifier uses a conventional push pull configuration with two MOSFETS simply paralleled in each side of the amplifier. The addition of extra devices in parallel may appear deceptively simple, but it is a technique that has been proven in the H Granberg designs for Motorola. It's also a technique used in the Hitachi application note which forms the basis of the very popular Maplin audio amplifier widely used on the 73 kHz band.

The input signal is applied to the primary of T1. This provides impedance matching and, with its centre tapped secondary, generates the anti-phase signals necessary for driving the FETs in push pull. The input impedance of the FET pair is largely determined by the 27 Ohm resistors which connect the gates of each device to RF ground. These resistors are soldered as close to the gates as possible. The incoming RF signal develops a voltage across the resistors which controls the conduction of the FETs. This "Passive gate" technique enhances stability and broadens the bandwidth of the amplifier. The input VSWR is less than 1.5:1 from 60 kHz to 1 MHz. The 1 Ohm resistors in series with each gate and the 4700pF capacitor also add to stability.

The IRFP450 is an enhancement mode device and requires between 3 and 5 Volts on the gate before it begins to conduct. The devices share current evenly if operated in class B, i.e. just on the point of conduction. As the DC input impedance of the FETs is very high, only a simple voltage source is necessary. The pre-set potentiometers provide up to 6 Volts and are used to set the bias point and linearity of the amplifier.

On the output, each pair of FETs have their drains connected in parallel. The DC is supplied via balanced feed choke T2. The bifilar winding of T2 has the advantage of suppressing any even order harmonics.

Output power is coupled from the FETs by four 0.47uF capacitors. Strictly speaking, these are not essential, as the primary of T3 is not centre tapped to earth. However they have no effect on performance and provide protection for the power supply in the event of a short in the output transformer.

The drain to drain impedance of the amplifier when running 250 Watts from a 28 Volt supply is 6.3 Ohms. To match this to 50 Ohms, T3, a conventional transformer, has a turns ratio of 3:1, or an impedance ratio of 9:1.

The core material used for T2 and T3 is a 3C85 ferrite. This is used extensively in switched mode power supplies but usually in an E type of core. As I have experienced flash over with some E cored transformer designs on 73 kHz I tried to use a toroid so that, if necessary, the windings could be separated. A wide range of 3C85 cores are manufactured by Philips Components and are available from Hawnt Electronics, in Birmingham. The cores specified work perfectly. The output core is 58 mm diameter and is barely warm at 250 Watts. It would be suitable for powers close on a kilowatt.

The decision to construct the amplifier for use in a 50 Ohm system is convenient but not mandatory. The 50 Ohm output is useful as it allows easy measurement of power. My Bird model 43 with a 2-30 MHz insert reads zero, but the cheap SWR bridge from my shack reads just 30% low on 136 kHz - which is usable. In practice the amplifier is likely to require matching to electrically short antennas, e.g. the Marconi T. My original thought was that these would present a very low impedance, perhaps less than 2 Ohms. However, the addition of losses in practical loading coils and ground systems will raise the resonant feed impedance to 50 Ohms or higher.

It is important that the amplifier is followed by a low pass filter.  Even a good linear will generate harmonics at -20dB, and -12dB is not unusual. A capacitive input LPF will also aid stability by providing a load for any harmonics which would otherwise be reflected from a narrow bandwidth LF antenna.

The PCB design includes pads for a simple TX / RX switching circuit. One or two relays can be used depending on the degree of isolation required. If a second relay is fitted, then the receiver input can be terminated in 50 Ohms or shorted to ground during transmit periods. At this power level the relays should not be hot switched.

Finally, space is also provided on the PCB for an optional Pi LPF at the input.

The power amplifier requires about 5 Watts of drive to produce full output. In my system I’ve used a TDA2030 audio amplifier. These audio IC’s are very robust but have a 4-8 Ohm output impedance. A small 1:3 turns ratio step-up transformer is used to match between stages. Additionally, - The 'volume control' on the audio amp provides a convenient method of adjusting RF output power.

The supply of 28 Volts was chosen to take advantage of the large number of switched mode supplies available at rallies. Typically a 12 Amp current limited supply can be purchased for less than the cost of the components of a linear equivalent. The power can be changed by increasing or decreasing the supply voltage. On rare occasions I have run the amplifier at 40 Volts to make that special DX contact. This produced 350 Watts which I consider as the maximum practical limit. The amplifier’s 3dB bandwidth is approximately 60 kHz to 900 kHz and so it is suitable for use on other amateur LF allocations.

The bifilar winding for T2 can be made by holding two wires in a vice
or pliers.  The wires are then pulled to equal lengths and the other end held in the chuck of a hand, or electric, drill.  Pull the wire taught and turn the drill until you have 2 or 3 turns per inch (1 turn per 10mm). Select the most evenly wound section and use this for T2.
Two different coloured wires are recommended for T2 to help with the connections.

Following  publication  in the LF Source Book,   this circuit has been successfully reproduced by operators throughout Europe. Several modifications have been incorporated which improve gain and increase output. The photo below shows an early version of the PCB but with IFRP450 FETs fitted. The PCB has been redesigned with correct pad layout for the IRFP450 FETs. These are now recommended replacements for the original Hitachi devices, although the original 2SK413 have greater linearity.
With the IRFP450 FETs the 4 semiconductors have a total potential Pd of 190 x 4 or 720W.
The 22 Ohm gate resistors have been changed to 27 Ohms.
With these changes the amplifier can be run at 250W with 28 V or at higher powers with supply voltages from 28 up to 48 Volts.   At 48V, with T3 as shown, the power has been measured at a little over 500 Watts.  350 Watts is a more reasonable maximum. 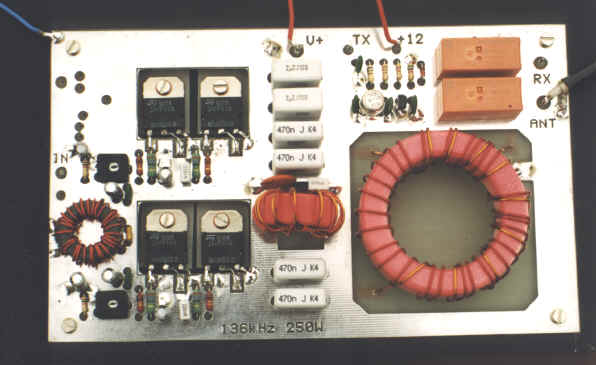 PCB
On the PCB I've produced for the project, the FETs are mounted through two cut-outs in the center of the board. All holes are drilled at 1mm. The board is double sided, roller tinned, and is not small at 190 x 115mm, but I believe this allows for ease of experimentation

The PCB includes  pads for TX/RX switching relays together with a two transistor relay drive circuit. Either one or two relays can be fitted depending on the isolation required. Also included is space for a low pass ( Pi ) filter on the input.

Hopefully all this will get some more stations on LF!

Some  modifications and comments based on amp using IRFP450 FETs -FOR INFO ONLY!

For some  thoughts on maximum power and protection, look at  LF On-the-Air or the class D conversion.