The circuit for the VSWR Meter is by no means original, but it is probably one of the most useful accessories that I've made for my LF station. Constructed from parts collected at Radio Rallies, the total cost was Ł8 ($12)

The circuit is a version of the one used by Dave, G3YXM, which in turn was adapted from a circuit by LX1PD. I'm sure all the designs work well, but for a couple of hours work, they're worth having.

My VSWR bridge uses twin meters so I can  see forward and reflected power simultaneously. It would also be possible to use a single meter with a switch to change between forward and reflected. The meter has been tested to 500 Watts but could be used up to 1000W + with a change of detector diodes and the addition of 2 resistors. 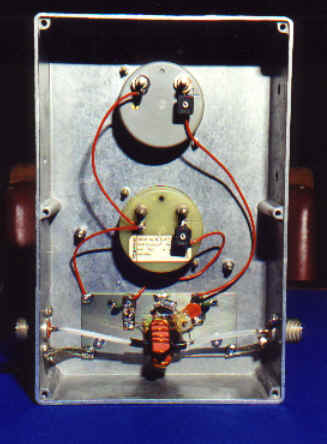 As you can see - There's not much to it!

The core is wound with 12 bifilar turns of 0.56mm enammeled copper wire.  This is not critical, Dave's circuit has 18 turns, but 12 seems to work just as well. To ensure the meter can handle high power, I've used the inner conductor from a length of RG58 coax for the transmission line between the  two SO239 sockets.  The polythene insulation ensures that it will take several thousands of volts before the circuit would fail.  This "single turn" through the core is held in place by a small nylon tye-wrap. It's important that the link is held in position as any change would affect the degree of coupling between the transmission line and the bifilar "secondary". This would  change the calibration of the instrument.

Calibrating the meter is simple.  Connect a transmitter and a 50 Ohm dummy load. Start with the variable resistors in the meter drive circuits at a mid way position. Apply power and slowly increase until you have a reasonable deflection on the forward power meter. Look at the reverse power meter and adjust the variable capacitor for zero reflected power. Next, apply full power and adjust the trimmer to indicate the required   full scale deflection. If needed, the meter's scale can now be calibrated for power. Finally, reverse the connections to the instrument and calibrate the other meter for "reflected" power.  When finished it's very easy to see the difference between a load of 50 Ohms and one  of  75.  Not so easy if you're just using an RF ammeter as I have been for the last year.

If you need the meter to be used with higher power then change the series resistors from 10k to a higher value. Additionaly, the 1N4148 diodes may need to be changed as they only have a rating of 75 Volts. A suitable alternative may be BAT 127's these are rated to 300 Volts and are stocked by RS components as part number 456 - 890.

Please disregard the phasing indicators on the coupler. - Only type available in the library!
The 500uA meters  were purchased cheaply at a rally, but could be changed for 1mA movements. The trimmer used is a 57pF  PTFE dielectric 300V component. Its parallel 39pF is a 1kV ceramic