* Feb 2011.  New application:  For use as a frequency marker with the FUNcube dongle 64 - 1700MHz Software defined radio. The signal source generates signal every 96MHz from VHF to microwave. Use it to test antennas or check the frequency of your VHF/UHF SDR.
Click on picture below right from Mark Hammond N8MH. It's the full size version of Mark's screen using the AMSAT-UK signal source with his FUNcube dongle and WRplus V1.04 software. 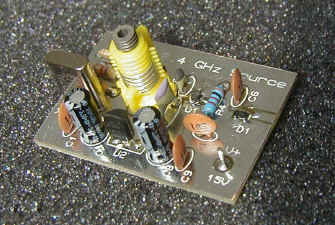 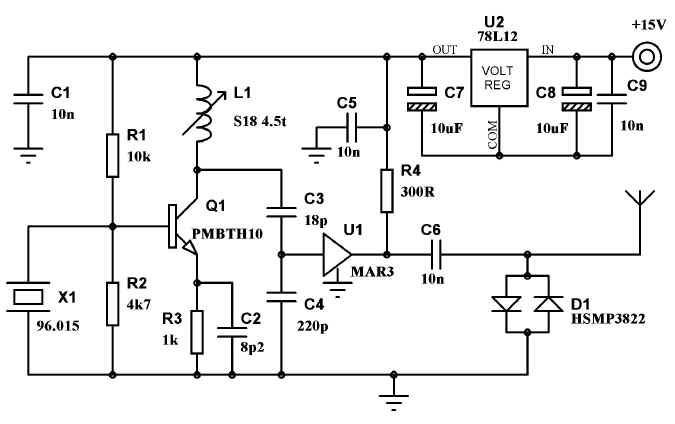 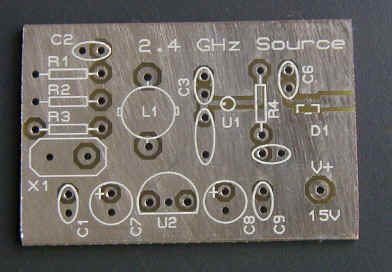 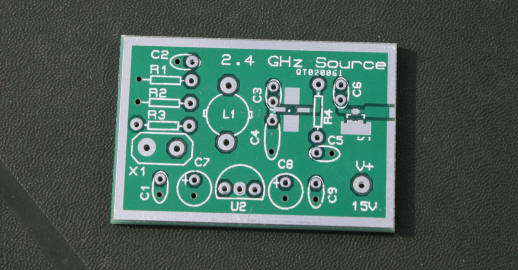 A full kit of parts is available from AMSAT-UK. Price for members is £15 inc postage.   AMSAT SHOP

With Oscar 40 now safely in orbit and with S band becoming a primary downlink for several satellites, there’s a lot of home construction and conversion of microwave equipment underway.

Unfortunately, when it comes to aligning S band receivers, microwave signals from space are not easy to find and are not ideally suited for initially tuning that ‘thing of joy and beauty’ that you have worked so hard to construct.

This signal source is a harmonic, or comb generator, which produces a series of strong outputs across the electromagnetic spectrum from VHF to 10GHz. These signals can be used to align receivers and converters or check the radiation pattern of antennas.

The circuit below uses a crystal oscillating at 96.019MHz. Its output is amplified and the signal applied to a pair of PIN diodes which produce an excellent signal at the 25th harmonic in the S band satellite allocation.

X1 is a third overtone crystal. Unlike their fifth overtone cousins, they can be used reliably with very simple circuits. Q1 forms an oscillator, while coil L1 and capacitors C3 and C4 are the resonant circuit. C3 and C4 also form a capacitive divider which allows a small signal, with low impedance, to feed U1 a Mini Circuits MAR3. This amplifier has a gain of about 10dB from DC to over 1GHz. With 50 Ohm input and output impedances, MMIC’s have greatly simplified microwave construction. Other devices from the same manufacturer have useful gain at 10GHz and some experimental 24GHz IC’s are just becoming available.

The amplified output from U1 is AC coupled to D1, a pair of antiparallel PIN diodes The harmonics produced pass along short stripline to the edge of the PCB.

The kit, available from Amsat-UK, has just 21 components and can be constructed in about 30 minutes. The PCB has tracks on both sides and now uses plated through holes to pass signals through the PCB.

When complete, the board can be mounted in a screened enclosure. I found it was possible to solder the board’s output stripline directly to the center conductor of an RF connector. In my prototype, I selected a chassis mounting BNC socket, but any other microwave connector would be suitable. To increase mechanical strength, I added solder tags to the BNC mounting bolts and soldered these to the ground plane on the component side of the PCB. My ‘antenna’ is simply a short length of wire mounted in a BNC plug. The body of the metal enclosure acts as a ground plane. The results have been quite pleasing. The circuit oscillates at 96.019 MHz and produces an S9+ signal just below the engineering beacon on the AO-40 S1 transponder. It was also possible to hear the 108th harmonic on a 10GHz receiver, although with this particular crystal, the harmonic falls near the terrestrial, not the space allocation.

Under no circumstances should you connect this source either directly to a receiver or to a high gain antenna. The combined power produced across the spectrum could damage your receiver or travel for several kilometers causing interference.

1) L1 is part of a tuned circuit. You will probably need to adjust the core in L1 for resonance. On my samples the core needed to be initially set level with the former and then turned ACW out of the former by 3 full turns.
Take care with the ferrite core, it is brittle and will crack if you use a metal screwdriver.

3) Minicircuits appear to have removed the white dot marking the input to the MAR3SM. The input of the device can still be identified by its lead which is cut at an angle. Agilent devices are marked AO3

Finally I have made the complete measurements on your 2.4 GHz Signal Source.


NOTE:
Measurements are made with HP 141 - HP8555A spectrum analyser and 50 ohm
probe with 30 dB attenuation ON

The above figure are net not including the attenuation of 30 dB.

2400,375 MHz harmonic is very strong and I will inform you after
experimenting with an interdigital filter on the output in order to cut all
undesired harmonics from the air.

If you made measurements by yourself please let me know your figures.

In addition the Signal Source is very useful for spectrum analyser
calibration because the HP 8555A has analog frequency reading.
only.

No other signals or spurious are encountered between one harmonic
and the subsequent one.

The oscillator signal is very clean with -120 dBc of phase noise at 10 KHz
offset from the carrier.