Although the whole 136kHz allocation is only 2.1kHz wide, a variety of modes are used and there is a voluntary band plan!   By necessity the modes used have a narrow bandwidth. CW is the norm, but there is some use of  the new PSK31 as well as some more exotic data modes.

One particularly effective mode is QRSS, i.e. CW sent at very slow speeds, 1 dot period equal to 3 or 4 seconds is typical.  To receive the slow CW, the audio from a receiver is sent to the input of a sound card in a computer.  There are two programme which are popular. Spectrogram by Richard Horne or Spectran by I2PHD and IK2CZL.    The programmes takes the received audio and analyses it by performing a fast Fourier transform. The resulting data is displayed on the computer's monitor as a plot of frequency against time. Signal strength is shown as a variation in colour. Spectrogram can be downloaded free of charge from the Internet.

So what's the advantage?

In a normal receiver, the signal to noise ratio of the recovered audio is directly proportional to the bandwidth of the (I.F.) filters. When we receive a particular  mode, the radio will have a filter to match its bandwidth. e.g. 6kHz for AM and 2.4kHz for SSB etc.  Frequently, CW operators use 500 or 250Hz filters. However there is a limit.  If you reduce the bandwidth of a mechanical or crystal filter too far, you'll  find that the filter "rings". Spectrogram can simulate an extremely narrow filter of less than 1Hz wide and this allows you to receive the CW when it would normally be many dB's below the noise level if received with an SSB filter.

One person who saw the potential of QRS CW was Peter Bobek DJ8WL. Sadly, Peter became a Silent Key in 1999. It was my privilege to meet Peter at the 1998 RSGB HF convention and to share in his infectious enthusiasm for amateur radio. Due to Peter's farsightedness,  I and many others, are now benefiting from his recognition of the potential of QRSS and were able to make our first QSOs with Germany using slow CW.

Shown are the characters  0 M I N

The picture above was recorded by Peter during a QSO with the Whitton club station G0MIN. The QSO between London and Frankfurt was apx. 600km. At the UK end no signal could be heard from the speaker under S8 QRM in a bandwidth of 500Hz. However, using spectrogram with 0.3Hz bandwidth, the signal was Q5.  The transmitter was 200 W to a wire 234 feet long.

Following the callsign is the report M sent 3 times to Peter.  This uses the moonbounce reporting procedure of using the letters T M or O to describe the strength / readability of the signal.  - "O" represents perfect copy. - It's much easier than RST especially when, if you look at the scale, it's taken 3 minutes to send just the callsign. The QSO was made at 22.00 local time.

During this QSO our laptop failed. In desperation the text received by Peter in this particular over was generated  using a hand key and a wristwatch!

In this screenshot ON4ZK can be seen as received at my home QTH in IO91TK. In this image the CW is very clear and the signal could be heard in the speaker. So why use Spectrogram?
Well, I had heard Gaspard on many occasions, but with my small antenna, just 8.5m high, I had never succeeded in getting my signal heard in Belgium.  However, one CQ in slow CW and ON4ZK was in the log with O reports in both directions. Spectrogram also allows you to measure the signal level on the screen. In this shot the CW is 34dB above the background noise.

73kHz  QRS
Before the 136kHz band was introduced, amateurs in the UK were given access to an LF allocation at 73kHz.  This was available on a temporary basis only to those who applied for a notice of variation to their amateur licence. With 136k now widely available across Europe, the 73k band was to have been withdrawn in June 2000 but it has been extended one more year.
73 kHz is very difficult to use. Band use is dominated by noise and with a wavelength of 4000m any QSOs are usually the result of much hard work and planning.

The distance between Mike and my location in West London is about 40km.

The receiver used was an IC756 with a MC1496 converter to 10.0718 MHz. The antenna was a 1m loop mounted in the garden. The signal level from the loop is not as great as my vertical, but it does give a lower signal to noise ratio. 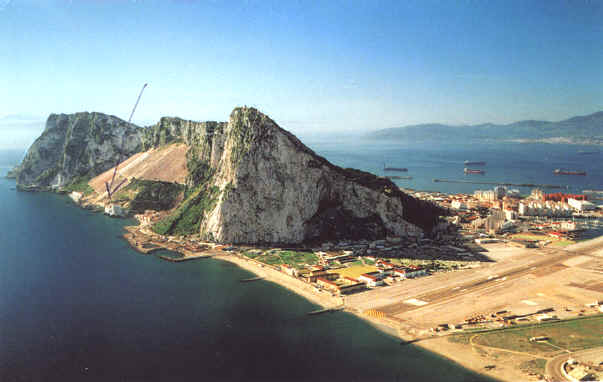 Gibraltar and the Caleta Palace hotel.   (sri abt the arrow!)

In October '99   I visited Southern Spain and Gibraltar with Tony, A45ZN, to participate in the CQWW SSB contest. During the visit, we managed to errect a 160 foot long wire on the 8 eight story high Caleta Palace Hotel. From there, we were able to monitor MSF from Rugby in the British Midlands on 60 kHz and DCF39 from Germany on 138.83 kHz. At present 136kHz is not allocated in Gibraltar, but with luck, the band may be introduced if only some of the local operators will apply to the Department of Trade.

The aerial photo is looking South with the Spanish coastline visible across the bay to the right.  The African mainland, Morocco,   (not visible) is just 14 miles to the South and can normally be seen just to the left of Europa Point at the Southern end of The rock.

The Spectrogram image below was recorded at night in ZB2 which was by far the best time of the day to receive signals from 1900km +.     The long wire antenna was designed to be resonated on 136k and not at the MSF frequency. Even so, the signal  from the Rugby time and frequency standard transmitter was impressive. If you look closely at the "oscilloscope" trace at the top on the image, you can see the receiver's  AGC reacting to the strength of the signal. The solid line at about 800Hz was local QRM. 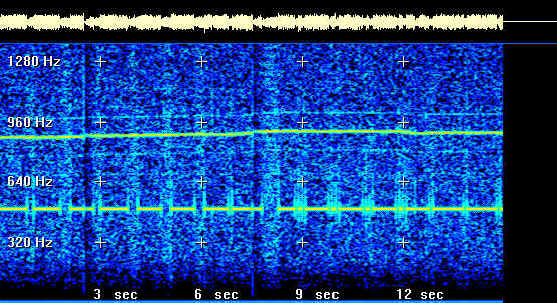 For more spectrogram images, have a look at the Isle of Man Dx-Pedition page.
Links to download Spectrogram and QRSCW by ON7YD can be found on the links page.
ARGO can be downloaded at www.weaksignals.com
As Geri, DK8KW, once said " LF enthusiasts do it more slowly" 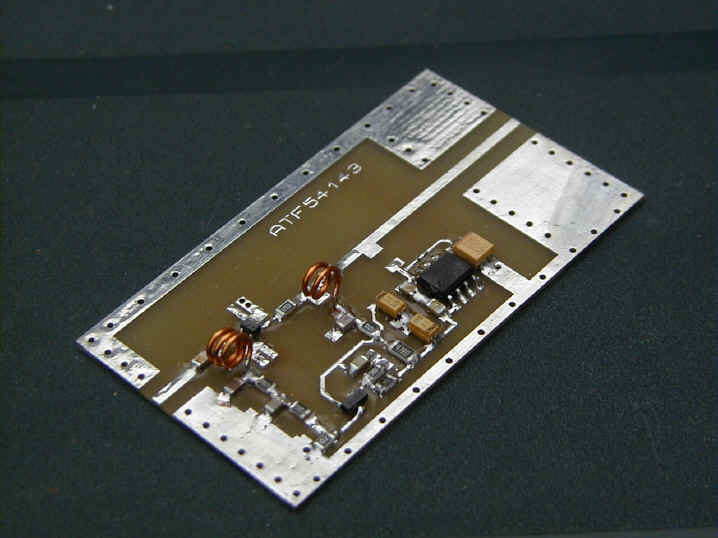