Over the past few years I've enjoyed being part of the team at Whitton Amateur Radio Group.

When the summers over, there's nothing better then to escape the cold British winter with Amateur Radio.  For us, there's a simple formula:  Can we get a licence and,  is it warmer than the UK? - Not much problem with the latter!

Here are some of the QSLs for the places visited by 'MRF and the Whitton group. 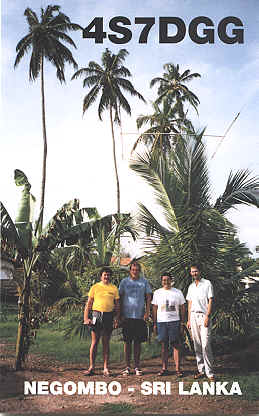 Sri Lanka was the first club DX-Pedition and my first opportunity to sample the delights of being the cause of a pile-up and not the person calling underneath it. The trip took place in the summer of 1992 and was our first DX Trip. It was also the first time we printed a QSL card with pictures of the operators. And the last!
The card here was the first "guest"callsign allocated by the Sri Lankan authorities to a visiting Amateur. In this case - Douglas Goodison. Hence the call,   4S7  Doug Goodison, (Guest)

The main callsign was 4S0UK, a special call allocated to the Radio Society of Sri Lanka, and used by us during our month in the Country.
In planning this trip, we made a lot of mistakes. e.g.
1) Carrying a 75lb linear as hand luggage in an airport with no trolleys (Not easy when you're trying to pretend it's within the 2kg limit)
2) Flying a kite outside a Sri-Lankan army base.....And being arrested at gunpoint.

But we also learned an incredible amount about organising, and operating from, a DX-pedition.
The experience gained would be put to good use in future years.

During our visit we operated radio, toured the Country, and made a lot of Friends.
We also flew to the Maldive islands and were licensed with a variety of 8Q callsigns.   The Shack was a room 30m from the beach and the antenna was an 80 -10m   vertical dug into the sand with the warm salt water of the Indian Ocean providing a near ideal earth.. 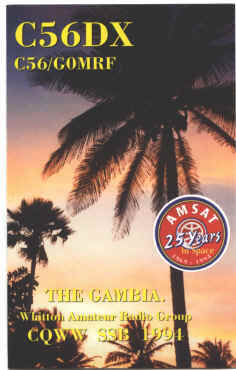 I n the winter of '93 Paul, G0ONA, and I visited the West African state of The Gambia. Operating as C56/G0ONA, we used our trip to plan a bigger expedition the following Autumn. Selecting a suitable site was easy.  Join a days fishing trip on the Atlantic and look back towards land to spot the tallest palm tree!

The text on our card said that The Gambia was the most stable state in the region. By the time we returned for CQWW '94,  The Country had been taken over by the army, and the control tower at Yundum international airport had acquired a machine gun post! - So much for stability. It's a great place though.
Did you know that the runway at Yundum is the emergency landing site for NASA's Space Shuttle

We arrived back in The Gambia in mid-October. Our group included 7 U.K. amateurs and local ham  Gary, C56HG. In total we had arranged transport and accommodation for 10 people.

In total we made 10,000 QSO's during our time in C5.  Included in this list were the first C5 to Italy contact on 6 metres and a couple of hundred contacts via the AO-13 satellite including mode S on 2.4GHz.

Despite all this effort, the contest organisers at CQ Magazine decided not to remember to send our winners certificate. They were happy to pocket the dollars and IRCs though!!!  Come on guys, wake up. 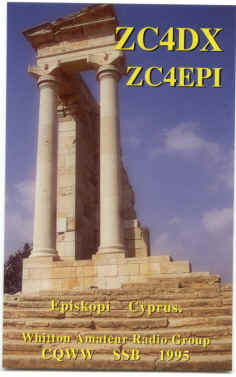 During October 1995, we were the guests of the amateur radio operators on the sovereign base of Episkopi.  The call, ZC4DX, was used in the CQWW contest. We were eventually placed 2nd in Asia - Narrowly missing the cup for the region.CQ Magazine once again failed to send the certificate for this entry in their contest!!  During the trip we set up an array of antennas on the base for satellite communications. These included 2m 70cm and 2.4 GHz.  We used these to work Oscar 10 and Oscar 13 to make some very rare QSOs with the USA and Japan. Sadly, ZC4 remains rare, as following our visit, the Amateur station at Episkopi Base was demolished to allow the redevelopment of the area. 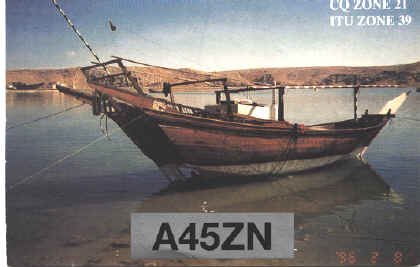 In 1997 and 1998 we found ourselves in Muscat Oman.  This visit was made possible as one of our Gambia DX-Peditioners was now employed by The Royal Omani Amateur Radio Society. In the '97 event Tony, A45ZN,  arranged a joint CQWW entry with members of ROARS using equipment and the call of the Headquarters station A47RS.

In  the 1998 contest  we used A45ZN which is Tony's Omani callsign. Propagation was amazing with 10m adding 1100 QSO's to our Multi Single score. That's one transmitter and multiple operators. It was nice to finally be in a DX Country during a period of good sunspot activity. It's great to have the choice of CW to JA on 6m,   round the world communication from the top of a Land Rover /P in the desert, or, picking out the stations in Europe on 160m. - At least you get to sleep on the 10 hour flight home.

In 2004 I was privileged to be asked to be part of the Five Star DXer's association Rodrigues Island DX-Pedition.
I was invited along as 'satellite specialist'. Unfortunately, Oscar 40 failed before the 31 team members reached 3B9.  Instead of satellite, Dave, WW2R and I re-worked the equipment into a small EME (Earth-Moon-Earth) station and succeeded in making the first 70cm QSOs by bouncing signals off the moon.