Testing from G to GW

( and the first laser QSO between two DXCC countries )

With the hard work completed and the transmitter and receiver built,  it's time for the fun part.

The receiver can be tested initially by aiming the laser across a room and using the receiver to pick up some of the light that is reflected.  Assuming you are listening to a healthy 599 signal you can reduce the level by attenuating the signal by aiming at an object further away or by changing the colour of the target. - White reflects a large proportion of the energy while perfect matt black reflects nothing at all.

Even though this laser system is fairly simple, it is quite sensitive. One weekend in March G0ONA and I drove to Wales to meet with Steve GW4ALG.  We had arranged the trip to try and make a QSO across the border between England and Wales.  The weekend started very badly back in London with one of the two laser emitters unexpectedly turning itself into an LED. With the module replaced, a mistake with the battery terminals fried all the semiconductors in the receiver. 24 hours later we had it all working but without a single two way QSO to our credit we set of for Wales.

Steve had located a couple of very good sites which allowed access to each side of the border.  The first was a mere hop across the River Wye. At 100m it was difficult to fail, but after a 130 mile drive from London, this QSO was 'insurance'.  The QSO took place at 19.00 on 11/March/01 between GW0ONA/P and G0MRF/P   with 599 reports each way. 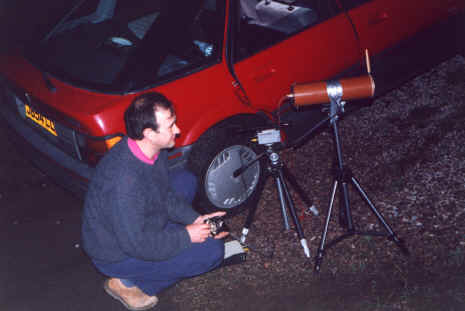 After a meal  we drove to the River Severn where Steve had once again selected two sites. This time the chances of success were considerably reduced. The distance between Black Rock on the Welsh side and the river bank near the town of Redwick in England was 5.1km. The English site was under the second Severn River road bridge but looking across from Wales, all I could see were hundreds of Sodium street lamps. When the clouds parted to reveal a bright full moon I thought we may as well go home. The  2m talkback crackled into life and Paul asked us to flash the car headlamps across the river. A few minutes later with Paul aiming towards the car we saw the feint glow of his laser.  This gave us something to aim at and with our laser transmitting,  Paul confirmed that he could hear the signal. 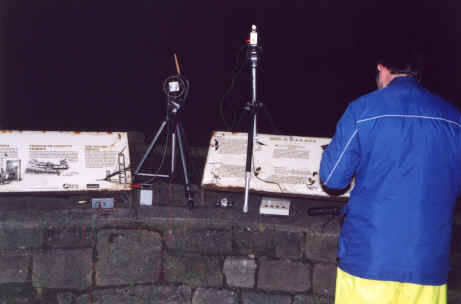 Unfortunately my simple receive optics were no match for the QRM or  the 60mm refracting telescope Paul was using as an antenna.  Ten minutes later, after a lot of swishing around, a few short bursts of tone and then a callsign emerged from my receiver.  I had eventually found the signal. Holding everything steady, I send Paul my call and a report of 569  He replied and confirmed the report.  But on my side receiving G0ONA/P was difficult. After a few attempts I heard callsigns and my report three times, once 579 and twice 589.  I sent back 589  OK? and was relieved to receive RRR 589 OK OK 73.
It was now 22.30 dark, cold and a long way from London, but after a great day, I didn't really care.