This circuit was developed after the original OPT201 detector was made obsolete by Texas Instruments.
The OPT301 is in a TO-99   8 lead package and has good sensitivity but a reduced bandwidth of 4kHz.  The peak response is just into the Infra Red region at 750nm but its sensitivity in the visible red spectrum at 670nm is only a few percent down. 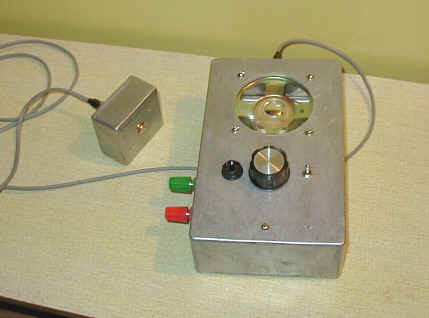 Detector (left) and a box housing an LM386 audio amplifier with waterproof speaker / headphone socket.
The detector is connected via a 2m length of twin core screened cable which supplies the 12 DC feed to the detector and feeds the audio back to the amp.

The circuit is almost identical to the original receiver. Changes are the new detector / PCB layout and improved op-amps. It uses a single supply at 12 - 13.8V. The detector has a a 10M Ohm feedback resistor soldered directly between pins 2 and 5.  The detector output is followed by a NE5534 low noise op-amp (3.4nV/Hz) which is configured as a bandpass filter. The final NE5534 is an inverting buffer amplifier with a gain of 20. The complete detector assembly is designed to be mounted in a small metal box at the focal point of a lens.

Click on the images below for a large scale picture 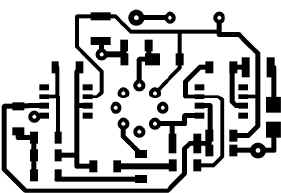 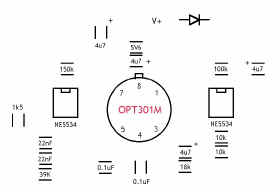 The track is viewed from the top or component side. The detector is fitted to the other side of the board where a groundplane in unetched copper has holes countersunk for the TO-99 package.
The 1N4002 diode protects against reverse polarity. It is soldered to the undrilled pads on the PCB.
Circuit notes:
A 10k resistor is needed between Pins 1 and 8 on the OPT301. This is shown on the PCB artwork but I've not yet added it to the overlay.
The capacitor coupling the signal out of the detector to the 39k was changed from 0.1 to 0.22uF
The capacitor across the zener diode  was also changed to 0.22uF
With a single supply line the body of the detector is held at the zener voltage. Therefore it should be isolated from the groundplane and from any metal enclosure.

Four earth connections are required through the board.
1) NE5534 pin 4 (on the left above)
2) Supply decoupling 4.7uF tantalum (above and right of 5534 pin 8)
3) Detector Pin 3
4) Pad in lower right of PCB connected to the 10k resistor and output ground.

Performance of the bandpass and buffer amplifier.
To evaluate the op-amp section I connected a 600 Ohm sig gen to the input of the bandpass filter and measured the response at the output of the buffer. The Input was adjusted from 50Hz to 3kHz with a constant level of 200mV Peak to Peak.
As you can see from the results below, the 6dB bandwidth is just 200Hz. This makes the detector ideal for transmitters using modulated CW on a fixed frequency.
An OPT301, using 10M feedback with a bandwidth of 200Hz gives a Noise Equivalent Power of 3 x 10-11 Watts.
My TX uses a 4MHz crystal and a CMOS 4060 oscillator / divider to generate 488Hz. This degree of accuracy gives the option of using a lap top and modern DSP software (e.g. ARGO or Spectran by IK2PHD) to receive signals 20dB below normal noise level.
The 40dB rejection at 50Hz gives a high tolerance to interference from street lighting.
Voltage gain at the design frequency is x11  or 20.8dB

The bandpass filter center frequency is selected by 2 capacitors and 2 resistors. It can be changed to any audio frequency of your choice. Design equations are published in the ARRL handbook.