This project was built as an experiment with small lasers. It's a communications system that's just about as simple as it gets. The transmitter is based on a 3mW semiconductor laser pointer module and uses modulated CW.  The receiver is built around the Burr Brown OPT-210P detector / amplifier.

Despite its simplicity, signals have been sent over a 1km range without using a lens at the receiver. With the 4 inch dia lens the range is much improved and my personal best is currently a 2 way QSO over a distance of 22km. Using the 10mW transmitter described elsewhere on the site my current "Best DX" is 49.3km which is the current (May 20) UK record.
See the results of our early testing and our Dx-pedition to Wales

So, how far will a low powered laser beam travel? And over what distance can we hope to detect that signal?  The answer to these questions can best be answered by looking at this page from "The New Frontier" by KA1GT published by The American Radio Relay League in QST.  The graph compares laser range to detector sensitivity and area of lens or mirror for a standard 1mW output laser.

Transmitter.
The Transmitter electronics (on the left below) is built deadbug style and is housed in a diecast box. The laser module is glued onto the copper board and an old telescopic sight has been fitted to the top of the box. The crosshair sight is vital to ensure the laser is pointing in the right direction although holding the laser module in position for an hour while the glue set wasn't my idea of fun.
The electronics uses a crystal and a 4060 IC to generate a 488Hz squarewave. This signal is used to switch the laser on and off generating the modulated CW signal.

A source of laser pointers in the UK is:   www.laserpointers.co.uk

The higher power 10mW transmitter has been mounted on a plate fitted with two lengths of studding that allow vertical and horizontal adjustments. Aiming the transmitter is the most difficult aspect of laser communication and a fine adjustment is very desirable and will save a lot of time. 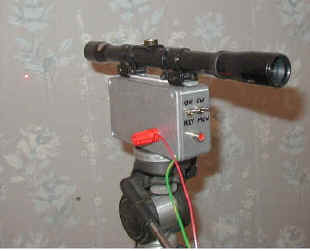 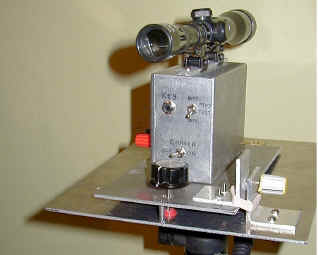 Receiver
The receiver needs a little more attention to detail.  I've built the receive electronics on a small printed circuit board using SMD components wherever possible. The PCB has the OPT210 detector a TLO71D audio bandpass filter and a TLO71D buffer amplifier. The detector IC looks through a hole cut into the base of a 50mm square box and the whole assembly is mounted at the focal point of an old magnifying glass in a 4inch diameter length of drainage pipe.
The output from the PCB is a filtered audio signal containing a 488Hz sinewave. This is amplified by an external LM386 audio amp which can drive a speaker or headphones. 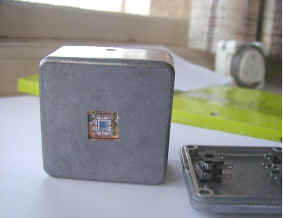 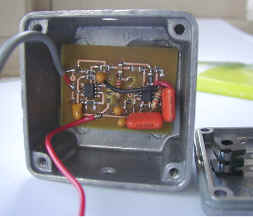 So, that's the electronics. Here's how I've mounted it in the 4 inch tube.
The position of the detector can be adjusted within the tube by the slots and the brass studding. Centering the detector in the tube is achieved roughly by adjusting the position of the nuts on the studding. No laughing at the magnifying glass please....I thought that if this doesn't work,  I can still use it for identifying those tiny SMD parts on my next project. The inside of the tube has been sprayed with matt black paint to prevent reflections.  In practice, this receiver is so sensitive that it can detect a modulated 670nm laser that is not visible to the naked eye. 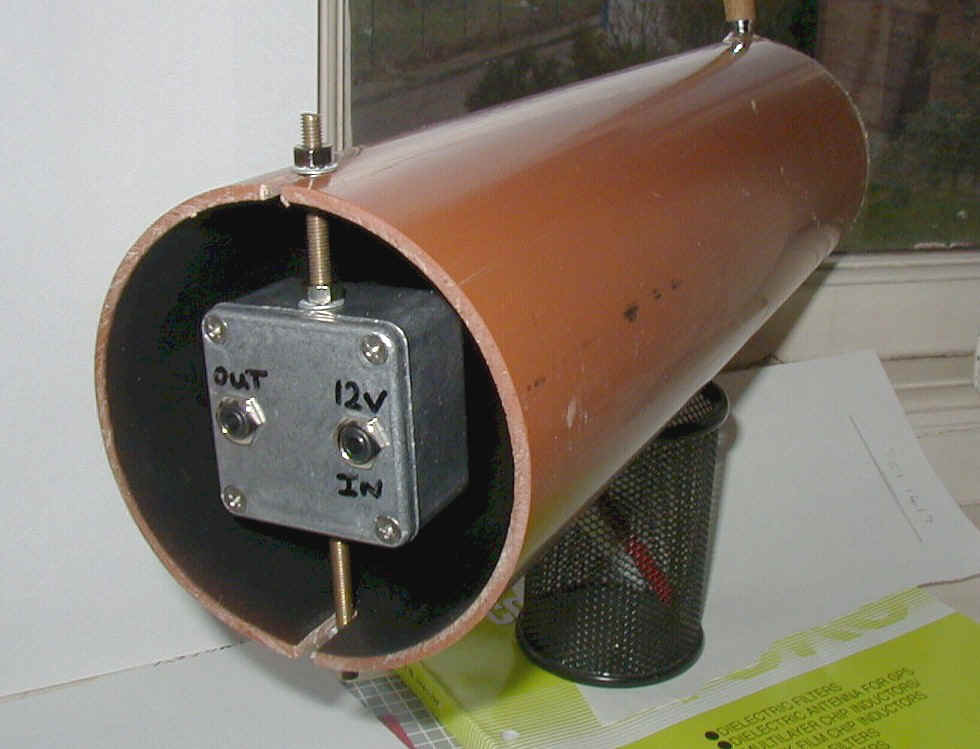 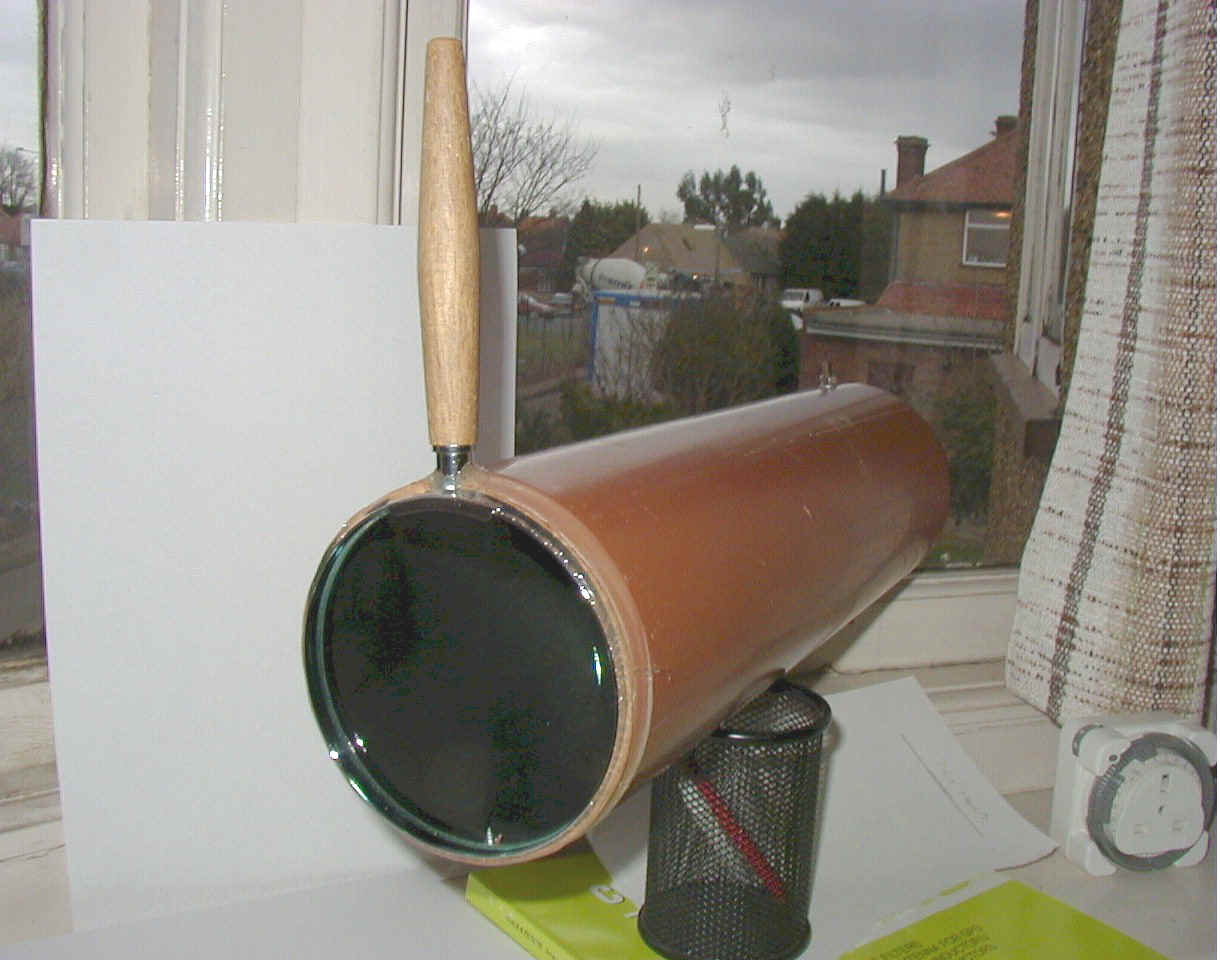 Slow Scan Television?
In Jan 2005, Allan and I did some experiments using SSTV.
The following picture was received via laser using the MMSSTV programme. It was encoded onto the laser using a pulse width modulator. 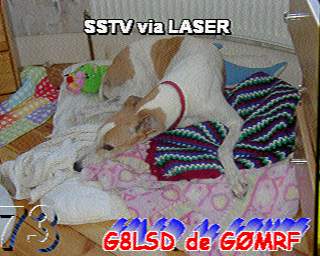