Here are two circuits for laser transmitters. The first uses a simple laser pointer module. Any of the normal 3 or 5mW devices will function well.  Imports from the USA or Hong Kong are frequently a higher power than the UK  approved units.

The modules normally contain 2 or 3   1.5 Volt mercury cells. The external modulated supply should duplicate the voltage used in your particular module. The electronics contained in the module will include the semiconductor laser diode and a constant current source. The ability of the constant current source to be switched on and off at audio frequency will change between manufacturers, but below 1kHz, this is not normally a problem. However, there are applications where the supply can be switched at 20 to 200kHz and voice or high speed data can be modulated onto this sub-carrier. For these high speed applications the circuit should be tested carefully with an oscilloscope.  If unsuitable, the constant current source can be modified or replaced with a circuit that has a faster response.

This circuit uses a crystal and a 4060 oscillator / divider to produce a square wave output in the audio range. In this case a 4MHz crystal giving 488Hz on pin 2.
The 5Vp-p square wave is buffered by 3 transistors which includes a totem pole driver. I've used two diodes to reduce the voltage by 1.2V which then supplies the laser module.
One switch is attached to the reset pin of the 4060. This is used to select CW ( constant laser  output) or Modulated CW. Another switch wired between the key input and ground allows the laser to be keyed via a phono socket or it can be switched permanently on. This is very useful when aligning the beam onto a distant receiver.

Some circuits have been published using 555 timers but I felt that  a crystal source would give greater potential for weak signal working. The high accuracy and stability  allows the use of DSP software to detect signals below normal noise level. These programmes are available free via the internet and use your computer's  soundcard to provide the DSP functions.  www.weaksignals.com

1) Always use talkback to coordinate transmissions with the other station. Looking at a laser over long distances through your receive optics can be dangerous.
2) Most laser modules use positive earth.
3) Heating the module to solder wires can damage the optics and increase the beam divergence.
4) A laser diode can fail but still appear to be working. However, what you'll have is an expensive LED with a light output that is a fraction of the laser and a beam that is not a coherent light source.
5) As the laser cools down on a cold winters night, the light output power will increase. This is not the advantage it first appears as the laser can fail because of excessive output power.
A huge catalogue of laser parts can be found at:  www.roithner-laser.com

A driver for discrete Laser diodes

If you want to increase your laser output power then you'll probably have to move on from laser pointers and use a laser diode. Then it's down to 'how much you want to spend', but at least you get to choose the output power and wavelength.

The circuit  below is adapted from an original idea suggested by K3PGP.
It uses a 7905 negative voltage regulator so that the body of the laser diode can be connected to ground. The audio is generated by a 4060 as above and a  PNP darlington transistor is wired across the laser diode as a shunt modulator.

You will need optics to collimate the output from a semiconductor laser as the angle of radiation of my prototype was 9 degrees high by 32 degrees wide.

The 20mW 670nm Laser diode and drive electronics.
The circuit uses two resistors to limit the Laser diode current. The resistor labeled AOT (adjust on test) should be selected VERY carefully. It should be the correct value to provide just less than the maximum laser power from the diode.  I decided to set the output to 10mW, well inside the max ratings of the diode. Audio is generated by a 4060. The 4MHz crystal, 10M resistor and 2 x 33pF capacitors have been omitted from the diagram for clarity but are the same as used in the other circuit described earlier.  C6 is 47uF, all other electrolytics are 10uF.  Other capacitors are 10nF.
Modulation is applied to the laser via a shunt modulator .  When the darlington transistor conducts, the current supplied from the 7905 and the two resistors is shunted to ground through the transistor and the 10 ohm resistor in its emitter. This circuit can be used with lasers up to 100mW output. 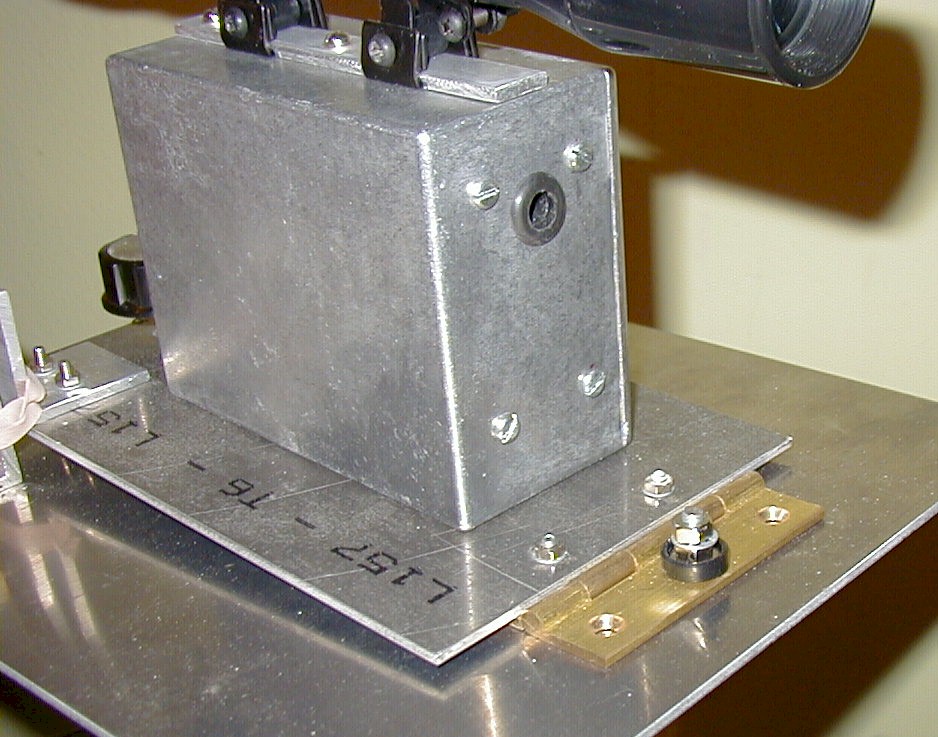 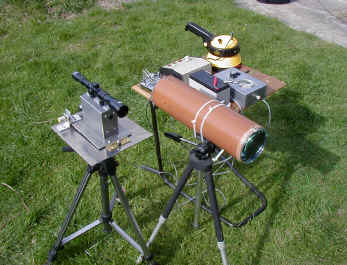 The completed PCB is mounted on the side wall of a diecast box.  The optics are contained in a small metal tube which I've just glued onto the PCB.  A coarse adjustment of the laser can be made by carefully adjusting the position of the PCB on the four mounting bolts. The final adjustment is made with the cross hairs on the telescopic sight which is a cheap 4 x 28  (times 4 magnification and 28mm lens diameter) bought new for £19.95 on the internet.